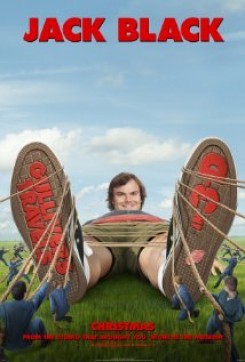 Travel writer Lemuel Gulliver takes an assignment in Bermuda, but ends up on the island of Liliput, where he towers over its tiny citizens.

Before filming, all grounds were inspected for hazards and sets were closed and secured. Cast and crew members were introduced to the animals and instructed on their proper handling. A truck travels fast down a road and passes some chickens. Trainers checked the grounds and placed the chickens on their marks near scattered food. A puppy pen was placed around them. The trainer removed the pen just at the last moment before the truck came closer. The experienced driver was careful to drive a path that was not close to the chickens. All horseback riders in the film were stunt riders or experienced actors skilled at riding, mounting and dismounting. All scenes in which horses run and gallop were well-choreographed, and actors used caution while on and near animals. The birds in the film were computer-generated imagery. American Humane Association also monitored additional horse action that was cut from the theatrical release.