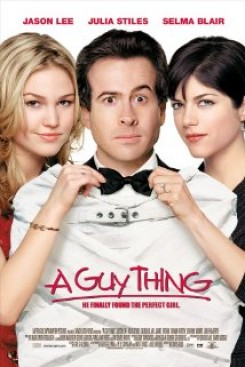 Although Paul is getting married in a week to the woman he loves, one morning he awakes to find a strange woman in his bed and no memories of what happened the night before. He tries to forget about this woman and hide it from his fiancée. The catch is, he begins falling in love with the unforgettable stranger.

Paul's neighbors have a dog which is seen standing in the hallway with the family as Paul is saying good-bye to Becky. The trainer put the dog on it's mark alongside all of the actors and visually cued it to stay from off camera.

There are a few scenes where a young boy walks with the dog on a leash outside. The actor and the dog were introduced before filming and the young actor always carried a treat that was given to the dog afterwards. With the memory of the treat in the dog's mind, the trainer would hand the actor the leash, the dog would willingly accompany the boy and the trainer would stand off camera to retrieve the dog afterwards.

Paul and Becky go into Ray's house when no one is home. They shine their flashlights throughout the dark house and come across a dog lying on a footstool sleeping. They proceed down the hallway and hear a growl. They turn and see the dog standing at the other end of the hallway. As the couple begins to run, so does the dog. To get the scene work accomplished a trainer held the dog at the end of the hallway as the actors took their mark. The actors began to run and the trainer threw the squeaky toy into the bathroom at the end of the hall. The trainer released the dog and verbally cued the dog to retrieve the toy. The dog ran behind the actors and as they jumped into the tub, the dog retrieved the toy and brought it back to the trainer who was waiting with a treat.

Later in the sequence, they run into the bathroom, jump into the bathtub and close the shower doors just before the dog jumps up on the doors. As the couple hides behind the shower doors, the dog stands on the other side growling at them. Paul throws a bottle of shampoo over the top of the doors, hoping to scare the dog, but instead the dog catches it and begins to chew on it. As the couple change places in the tub, the dog looks through the doors and growls at them. The couple tricks the dog by opening one of the shower doors and as the dog jumps in the tub, the two actors jump out of the other door, shutting the door behind them and trapping the dog in the tub. A plastic lip guard was worn by the dog to make it appear as if it were growling. The sound effects were added in post production.

To prep the dog for this complicated scene, the shampoo bottle was cleaned out, stuffed with paper and warmed a bit for flexibility. The dog was used to playing catch, so when the trainer who was in the tub threw the bottle over the shower doors, another trainer standing near the dog, but off camera, verbally cued the dog to catch it. When they filmed the scene, the actors got into the tub as a trainer was holding the leash of the dog nearby. Before the shower doors are closed, the dog watched the trainer toss a favorite squeaky toy into the tub. The trainer released the dog and verbally cued it to get the toy. The dog began to pace and look through the doors for the toy. The actors began to squeak the toy and the dog grew more excited and began to scratch and jump on the doors. The actor threw the shampoo bottle over the top and the dog began to chew on it. The shower doors were made of safety glass and the rug in the bathroom was taped to the floor so it would provide stability and traction. A rubber mat was placed on the floor of the tub. The actor opened the shower door and the dog was verbally cued by a trainer to go get the squeaky toy. As the dog entered the tub, the two actors exited out of the second door and the dog was left to his favorite toy, never realizing that he was alone.