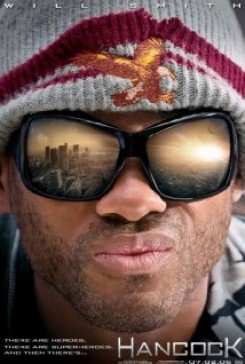 Hancock (Will Smith) is a superhero whose drunken behavior and short temper has caused him to botch numerous heroic opportunities. Now the public hates him. He decides to hire a public relations representative (Jason Bateman) to help repair his image.

Ray (Jason Bateman) and his family have a pet dog. For the two scenes in which the dog performs such mild action as walking on a leash with the family and walking through the bedroom and onto a balcony, a trainer placed the dog on its mark while another trainer stood off-camera using a combination of hand signals and verbal cues to get the dog to look or walk in various directions. The actors were introduced to the dog and instructed on its handling before filming began. All grounds were checked ahead of time for safety.

A car suddenly drops from the sky onto a street, startling bystanders, including Ray's son, who is playing in his front yard with the dog. The trainer placed the dog on its mark in the yard and stood just off-camera. The falling car was a special effect added in post-production. Later, the dog runs out of Ray's house and down an empty street. A trainer put the dog on its mark and another trainer called it over. The street was closed to traffic.

An eagle flies off a high ledge, followed by Hancock. For this scene, a trainer held an eagle on top of a custom-made platform. The eagle was filmed in front of a green screen to make it appear as if it were on a ledge above the city. Shots of the eagle flying were created with computer graphics.

The birds that Hancock flies with in one scene were computer-generated images (CGI) and the whale that he tosses into the ocean was a prop made for the production.