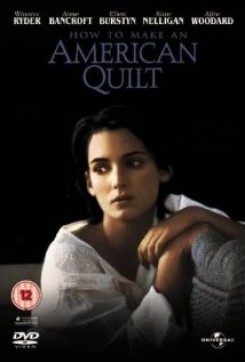 How To Make An American Quilt

How to Make An American Quilt is a present day drama in Grasse California about Finn, a sixty's type of girl who spends the summer with her grandmother, Hy, and her Aunt Glady Joe. Hy and Glady Joe, along with five other women of long time acquaintances, belong to a quilting group. They are presently working on Finn's wedding quilt, each using meaningful scraps of cloth pertaining to an important part of their lives. When finished, the quilt is suppose to tell a complete story. But in looking at it they realizes it is out of balance, not relating to each other in order to tell a story. They finally realize they must reconstruct not only the quilt but the acceptance of their lives and each other in order to regain a balance of loving friendship between all of them. After each woman has looked into her past reliving what she has done and the decisions she has made, the quilt can finally be finished. The group stays up for seventy-two hours straight in order to finish the quilt in time for Finn to take it with her. As the group of women stand back once again and view the quilt, they can see the love along with the balance back into their work. Each woman has a renewed respect and love for one another.

The animal action is minimal with the use of a dog and a raven. In one scene, Constance, one of the ladies in the quilting group, has a flash back and sees her dog, Chicki, dragging a pair of shoes through her garden. To accomplish this scene the trainer merely gave the dog hand signals along with voice commands and treats as a reward. In another scene, Anna, also from the group, is telling Finn the story about her family quilt. Anna's grandmother was walking down the road after the end of the Civil War looking for her parents when she sees a crow. Following the crow, it leads her to the man she ends up marrying. Anna explains that her people believed that if you follow a crow it will lead you to your soul mate. To accomplish this scene, trainer A released the bird while trainer B called the bird, giving him treats as a reward. In still another scene, Finn is in her bedroom and the crow taps on her window. To accomplish this the trainer used voice commands instructing the bird to peck at the window. Again treats were given as a reward. Finn's quilt is finished, so her grandmother places it on her as she sleeps on the sofa. When she awakens she looks out the window and sees a crow sitting on a fence post. Finn gets up and follows the crow through the fruit orchard until it stops. The bird sits on top of a fence post next to Finn's fiancee's van. The raven did as before and flew from A to B. Again trainer A released the bird while trainer B called it to its mark, rewarding it with treats. The American Humane Association assisted by the San Bernardino Humane Society was present on set to monitor the animal action.