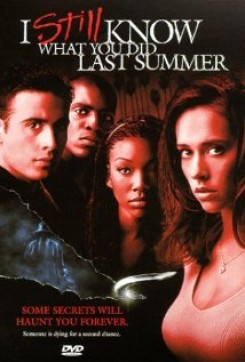 I Still Know What You Did Last Summer

Before the kids leave on vacation, there is a scene in a fishing village which is the hometown of the main character, Julie, where we see a small pile of red snapper being dumped off of a fishing boat onto the dock. A fisherman holds up two of the fish and holds them together as if they are kissing. Later, when the group is checking into their hotel in the Bahamas, a viscous barking Doberman comes running out of a back room barking, snapping and snarling at Tyrell, one of the main characters. The dog sits next to the hotel clerk, still growling. They encounter the same dog later in the film out on the tennis courts in the rain. The Doberman comes running after Tyrell, barking and chases him over the fence. Before Tyrell can get all the way over the fence, the dog grabs his pant leg in his mouth. Tyrell kicks him away and gets over the fence. The dog then jumps up on the fence barking and snarling. He has a leash/tether attached to his collar. In another scene when the kids are snooping around the house of one of the hotel workers whom they think might be the killer, they find a voodoo shrine with bones and several chickens legs/feet. Later, when some of the kids find the hotel manager dead in his office, they see the words "I STILL KNOW," written in blood on the wall. On the same wall are two large (supposedly dead and stuffed) fish. As the kids try to hide from the killer, they run to the hotel kitchen, where a large rat/mouse runs out of the kitchen and scrambles across the floor. In another scene during a big rainstorm, we see two birds (pigeons) flying around a greenhouse. They fly up and out of a hole in the roof. In one of the final scenes when the storm has passed and the killer is now dead (or so we think), we hear birds chirping in the background.