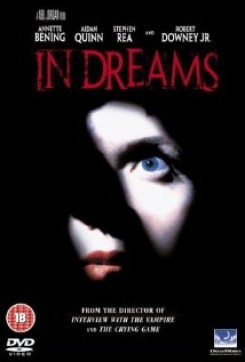 In Dreams is a film about a serial killer who is able to contact Claire through her dreams and show her his next murder before it happens. Claire tries to tell her husband and the police but they think she is insane and have her hospitalized. She breaks out of the hospital and goes after the killer herself.

The family dog is shown in several scenes running in the house and in the yard with the family. The trainer put the dog on his mark and cued him with verbal and hand commands. A man walks up to a growling dog and closes his mouth and pets him then he wags his tail and runs away. A car comes to a screeching halt and misses the dog who ran out into the street. Again the trainer cued the dog with verbal and hand commands. A dead, bloody man is lying on the floor and the dog appears to be eating his face. The camera angle is from the side of the body and the dog is really licking something off the man's face. The dog is shown tied to the end of a bed. Ropes were used to loosely tie the dog and he was released as soon as the scene was over.

Other animal action in film included fish swimming in a lake and dogs walking on leashes.