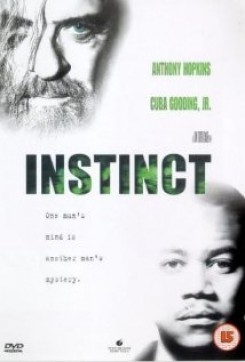 Instinct is a film about an anthropologist who travels to Africa, studies and lives among the gorillas, but finds himself accused of murdering two park rangers. While uncovering the motives and breaking the anthropologists code of silence, a psychiatrist is lead to question what it really means to be in "peace and harmony" with our animal ancestors.

Gorillas are central characters in the film. These giant primates can not be trained to be used in film, so the filmmakers employed the skills of master prop maker Stan Winston. Winston, used the combination of an actor in a gorilla suit and a headpiece that was intricately designed and controlled using sophisticated technology. The focal point of the film is the bond created between an anthropologist and the gorillas he lived with for several years. In one scene, live gorillas were filmed at the Los Angeles Zoo. AHA did not provide on-set oversight for the techno-primates, however we were present when live animals were filmed.