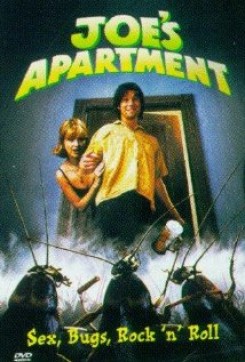 Joe's Apartment is a comedy about Joe, an young Iowian who has moved to New York, seeking an exciting new life. Unfortunately, he is mugged three times in his first day in New York and finds out it's not all it's cracked up to be. He can't find an apartment or a job. He happens across a stranger who agrees to help him try and find lodgings. After prolonged searching, they are just about at their wit's end when an elderly woman comes out of her rent controlled apartment and falls dead. Her keys fly through the air and Joe catches them. His newly found friend ceases the moment and screams out "Joe, it's your mother, and she's dead! You'll have to take her apartment." With this, Joe's escapades begin in the Big Apple, and he soon finds out he has quite a few new friends, thousands in fact. Joe's new apartment is already occupied by roaches. No ordinary roaches mind you, for they can talk, and talk they do as they help Joe avoid thugs, help find work and finally find true love.

Animal action is continuous throughout the film as the storyline revolves around the talking cockroaches in Joe's apartment. Five thousand live roaches, two hundred rubber roaches, 12 kinds of puppets and untold thousands of digital roaches were used both separately and collectively to create very cleaver and humorous scenes. For the most part, all scenes with roaches standing up speaking to each other, dancing, getting drunk while swimming in a wine bottle, swimming in the toilet, etc. were achieved with digital effects. Unorganized roach scenes were done with real cockroaches. Organized scenes were done with puppets or digitally. Through the beginning credits of the movie we follow the flight of a cockroach as it flies over New York City. This was achieved through digital technology. There are two fumbling hit men in the movie who are trying to run Joe out of his apartment so the city can build a high-rise prison in this slum area of New York City. They break into his apartment in order to try and scare him out of the building. It's at this point that Joe's thousands of new cockroach buddies come to his rescue, scaring the thugs away. The roaches and the thugs were filmed separately and then dubbed together in post production. In one scene Joe pours cornflakes into a bowl and pours milk on top of it. Swimming out of the flakes and onto the spoon are two roaches. When he puts the spoon in his mouth, you can tell by the expression o his face, he can feel the roaches moving. These were real roaches which he immediately took out of his mouth unharmed as soon as the camera quit rolling. Real roaches were also used in a scene where he delivers pizza to a customer during his short tenure as a pizza delivery man. There is a scene where a cat enters Joe's apartment. The roaches scatter everywhere, with the exception of one who hovers in the corner as the cat licks his lips. A roach lassos the cat and rides him through the apartment as if in a rodeo. As the cat bucks, trying to get the roach off his back, he knocks over a fish bowl on the table and sends the goldfish sailing through the air, landing in Joe's mouth as he sleeps on he sofa. Joe wakes up, choking on the fish, and as he spits it out of his mouth, it sails back across the room landing back in the fishbowl. The cat jumps at Joe's throat and in his struggle with the cat, it flies out the window. All the roaches in this scene, with the exception of the one in the corner, were digital. The cat and the live roach were filmed separately. With the exception of the establishing shot of the cat walking into the room, the rest of the scenes with the cat were accomplished using a fake cat. The establishing shot of the fish in the fish bowl was done with a live fish. The scenes with the fish flying through the air, landing in Joe's mouth and being spit back into the fishbowl, were all accomplished with a rubber fish.