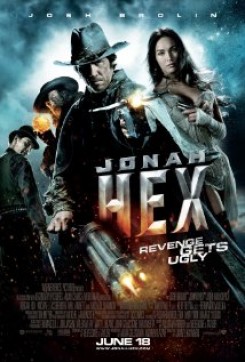 Bounty hunter Jonah Hex (Josh Brolin) is hired by the president to hunt down an evil terrorist who kills innocent civilians. But to accept this offer, Jonah must come face to face with the man who scarred him and murdered his family.

All grounds were inspected for hazards and sets were closed and secured. Horses performed such mild action as being ridden, standing tied to posts, and being mounted and dismounted. For these scenes, well-trained horses were ridden by or surrounded by costumed trainers or experienced actors who were skilled at riding, mounting and dismounting. All actors were given riding lessons and instructions on the handling of the horses before filming began. All galloping scenes were well-choreographed, and actors used caution while on the horses. Horses' rearing was a trained behavior. For the scene in which Jonah rides into town dragging bodies behind his horse, the bodies were lightweight prop dummies.

Except for in a couple of scenes involving powder blanks, the animals in this film were never around gunfire, explosions or smoke. The actors' shooting action around the animals was simulated, and whenever real guns were shot, the animals were removed beforehand. Animals were also kept a safe distance from torches.

The scene in which the horses run alongside a train had been well-rehearsed for several days before involving the moving train. Stunt riders rode the horses about 50 yards, keeping them a safe distance from the prop train and from each other. The part of the scene in which the men jump off their horses and onto the train was also a very well-rehearsed stunt that involved costumed trainers cuing the riderless horses to follow other horses away from the prop train right after the choreographed jump. The train's speed was controlled by crew members.

For scenes in which chickens or goats appear in the background, the animals were either held by costumed trainers or led by leashes.

A dog follows Jonah, runs with or behind Jonah's horse, is petted and licks Jonah's face. Trainers used hand signals and verbal commands to cue the mild action, which the trained dog was accustomed to performing. The dog and horse were familiar with each other and unfazed by each other. For the scene in which men appear to be poking at the dog with a stick, the men were costumed trainers exaggerating the action and pretending to poke the dog while cuing it to "back up" and to "growl" or "bark." For the scene in which the dog knocks a man down, this was also a cued behavior, and the costumed trainer pretended to struggle with the dog on top of him. The dog was kept a safe distance from the torch prop and controlled burn. For the scene in which a dead dog is seen on a man's shoulders, the dog was a prop.

American Humane also monitored a scene depicting a dog being "kicked" and "shot," which involved a "play dead" command and a prop dog. This scene was cut from the theatrical release.

A raven pecks at a coffin and flies off. Trainers placed the bird, which had a monofilament line attached to its foot, on its mark and placed birdseed on the coffin to get it to peck. Most of the scenes depicting birds flying used digital effects, except for one scene, in which a couple of birds were cued to fly a short distance. The raven coming out of Jonah's mouth was a digital effect.

American Humane also monitored a brief cockfighting scene, which was cut from the theatrical release.