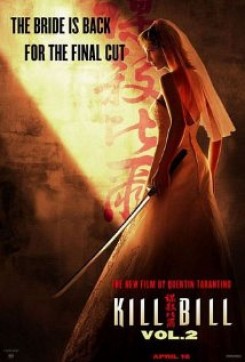 First there were five targets on her hit list. Now it's down to three. O-Ren Ishii and Vernita Green were the first to fall; now The Bride (Thurman) is out to finish the job by killing Elle Driver, Budd, and last of all, Bill (Carradine). However, something has thrown off her plans a bit. The daughter she was pregnant with at her wedding may actually be alive. What affect this will have on her quest for vengeance is unclear, but one thing's for sure: The Bride isn't going to stop until she's killed Bill.

This film contains one scene with a snake and another with some chickens near a moving vehicle.

Budd (Michael Madsen) opens up a briefcase and begins to remove some money when a snake inside strikes out at him and bites his face. The snake is later seen crawling on the floor near the briefcase. As Beatrix Kiddo (Thurman) walks by, the snake strikes out again. Three trainers worked with a black mamba snake for this part, and its venom glands had been removed.

Off camera, the snake was inserted into the open briefcase through a PVC pipe so it would appear as though it had been in the case the whole time. One trainer held up a target stick with a ball of fabric on the end to get the snake to strike, while another stood nearby with a snake hook to keep the black mamba in a contained area. Images of the venomous reptile biting Budd's face were pure movie magic. The shot of the snake crawling on the floor was filmed separately. A trainer placed the reptile on the floor and stood off camera with a snake hook to retrieve it afterwards.

The production filmed some scenes with animals in Mexico without an American Humane Safety Rep on set to monitor whether the appropriate safety precautions were in place. Also, the studio did not provide an advanced screening of the film for American Humane, which is the final step toward earning the end credit disclaimer. The public may be interested in knowing that in the October 3, 2003 issue of Entertainment Weekly, an article on the production of "Kill Bill Vol. 2" includes the journalist's first-hand observations of chickens being tossed behind the moving car. The article also says that Thurman accidentally killed a chicken while struggling to drive a stick shift vehicle. This footage of the chickens did not make it into the theatrical release, but may appear in a future DVD version.