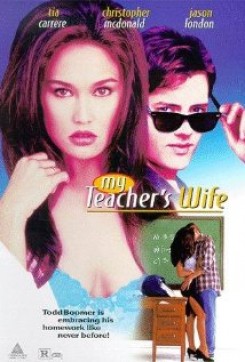 Todd Boomer is a typical high school student whose parents want him to go to Harvard. In order to get into Harvard he needs a letter from his calculus teacher, Mr. Mueller. However, Mr. Mueller can't write a letter for Todd with his present grade point average. That is when he meets, Vicki, an artist with a math degree and he thinks his problems are over, but they have really just begun.

Todd and his friend, Faber, are on their way home from a Halloween party when they see a gorgeous woman, Vicki, stranded on the side of the road. She was driving her husband's car when she had a flat tire. They stop and give her a ride to a local diner, where she calls a tow truck. In the meantime Todd finds out that Vicki has a math degree and he asks her to tutor him in calculus. A few days later she calls and agrees to tutor him at his house.

Todd works hard and his grades improve, but at the same time he is falling for his tutor. The more time they spend together the closer the two become. One night Vicki invites Todd over to her house for tutoring and things get so heated up they end up sleeping together. The next day he is on top of the world until Mr. Mueller asks him and Faber to watch his car in front of the school. When the boys go outside they are shocked to find Vicki's husband's car parked in Mueller's spot. Todd realizes that Vicki's husband is none other than his calculus teacher. The big question now is, can Todd figure out how to get the letter for Harvard before Mueller finds out about his affair with Vicki.

Todd has a dog named Bones. There are many scenes when Bones is lying on the floor at Todd's feet as he works or is on the phone. Bones follows behind Todd and Faber when they are walking down the street. The dog was merely following the commands of his trainer.

In one scene when Todd is at Mueller's house with Vicki, Mueller comes home from fishing and brings the fish he caught that day into Vicki's studio. He pulls out two trout from his cooler to show Vicki and decides to clean them while in the studio. He begins by cutting off the head of the fish, then gutting them. This is not actually shown and the sound of the knife hitting the table is all that is heard. The fish had been purchased dead at a local fish market.