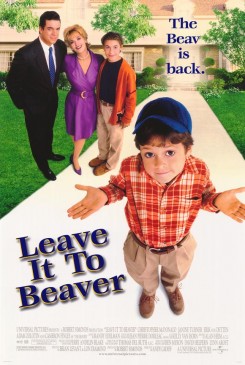 Leave It To Beaver

The Cleavers are an all-American family living in Ohio - wise father Ward, loving mother June, teen-age son Wally and 8-year-old "Beaver" Theodore. Beaver hopes to get a bike as a gift from his father and to please him tries out for his school football team and he makes it, only to be embarrassed. The bike he gets is quickly stolen. Meanwhile Wally is trying to help his friend Eddie Haskell to get the heart of pretty classmate Karen, but Karen seems to like Wally more, and that leads to tensions between the friends.

In a scene where brothers Beaver and Wally are delivering newspapers, a dog is seen in the back of a parked truck. As the boys toss a paper to a customer, the dog intercepts the paper, catching it in his mouth just before the truck slowly drives away. This scene was shot in cuts. The dog was placed in the bed of the truck and on cue from the trainer, caught the paper tossed in his direction. Then in a separate shot, he was filmed being driven away in the truck.

In another scene two cats and a dog are seen lying on a bed. The trainer placed the animals on their mark and cued them with verbal and hand signals to "stay".

Other animal action consists of some ducks in a pond, dogs being walked on leashes, and fish guts seen falling out of a can in an alley. There is also a dove seen in a bird bath just before a newspaper drops into the water. The bird then flies away.