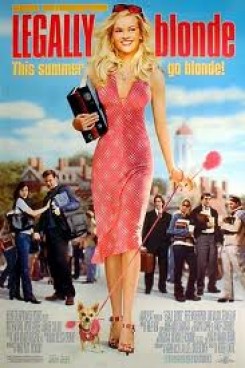 Elle (Witherspoon), a blonde beauty is in love with Warner (Davis) and fully expects him to pop the marriage question. Unfortunately, Warner is on his way to Harvard law school and believes his career aspirations need to be accessorized by a more serious looking fianc_. Elle is undaunted and applies to Harvard Law School herself _ she not only gets accepted, but she proves that blonde can adorn brains.

Throughout the film we see Elle with her little pooch named Underdog. Underdog was played by two Chihuahuas named Moondoggie and Maverick. Underdog is seen in various situations from lounging on the bed to sidekicking in a handbag. The trainer worked with the actress and the dog to familiarize both of them and was present during production to cue the dogs to different behaviors and expressions.

A second canine actor appeared in several scenes. Elle befriends a manicurist named Paulette who also has a pooch she treasures named Bruiser. Bruiser is played by a black and white Bulldog named Rufus. In one scene both dogs join in dancing with the ladies as Elle teaches Paulette to do the "Bend and Snap" manuver. Trainers were always present and cued the dogs, rewarding them with treats.