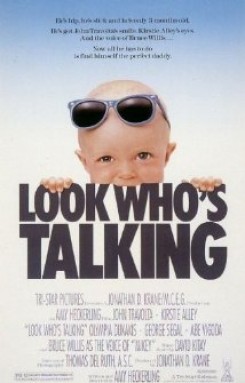 In this sequel, the "Who" in Look Who's Talking Now are dogs. In a true romantic comedy sub-plot, the two lead dogs, a snobby poodle and a scrappy shelter mutt, meet and take an instant dislike to each other. However, much as it is in an old Tracy-Hepburn movie, their relationship develops, with the best lines in the film delivered by the dogs via voice over. The main plot involves the Ubribacco family, James and Molly, and their children, Julie and Mikie. Dad, James is driving a cab while looking for more lucrative employment. He finds it when he's hired as a pilot for a private corporation. His new boss is Samantha, a sexy seductress who schemes to have James spending less time with his family and more and more time with her as he chauffeurs her through the very friendly skies. Things come to a head when Samantha gives James a phony assignment which places just the two of them in a romantic isolated mountain lodge on Christmas eve.

In addition to the two lead dogs, there are a variety of other dogs seen in the film and all of them talk by way of voice overs. The dogs mouths are not altered in any way, you just hear what they are thinking and saying. When an un-spayed female pet gets away from her elderly owners, she rendesvouzs with a roguish mutt. Weeks later she gives birth the five pups much to he dismay of her owners, apartment dwellers whos landlord will not permit them to keep the pups. They solve the problem by placing the puppies in a cardboard carton in front of their apartment building and giving the puppies away to passers by. All are adopted except the runt of the litter, until two tough looking bikers pass by. One picks up the puppy roughly by the neck as the dog's voice over says "No, not by the neck, not by the neck!". This scene is very, very brief and shot in cuts. Only part of the dog is shown being held by the neck while out of camera range, the rest of the dog is being supported so that the weight of the dog is not being by the skin on the back of his neck. The two toughs take the dog and place him carelessly in a container on the back of the motorcycle. As they are riding down a city street, the puppy takes a tumble out of the container and onto the street with the bikers unaware that this happened. Again, this was done in cuts so that you get more of an impression of what's happened through the jumble of film editing without the details of the specifics of the puppy tumbling onto the street. As the puppy sits in the middle of the street, a car approaches, passes over the puppy and speeds on its way. This scene was also filmed in cuts. The camera photographed a car approaching from the front and then photographed a car departing from the back. The puppy was not present during this scene. When the puppy was filmed in the same shot with the car, the car was a safe distance from the pup. You never actually see the car passing over the puppy. The next time you see the runt, he's fully grown and roaming free on the city streets when he's picked up by an animal control officer and taken to the shelter. At the shelter there are close-ups of various dogs, all in cages, and there are a number of pedigree dogs with voice overs to match, such as a Scottish accent for a little Scottish Terrier. When the runt is not adopted, he is given his last meal, a special liver dinner just prior to his being destroyed (they do used the word destroyed in the film). Just as the runt is being led out of his cage, James enters with Mikie. Mikie immediately spots the runt and knows there's no other dog for him and the runt is adopted. When the three of them arrive home, they find a beautiful white Standard Poodle, named Daphne. Daphne is a gift from Samantha. Daphne is a very snooty Poodle and is condescending to Rocks, the runt's new name. There are a variety of shots of the dogs doing different things, such as sitting up, begging, and even peeing against the furniture. These were all trained behaviors which the dogs performed on verbal commands with food as a reward. ate one night Daphne has to go to the potty but on one will get up to takes her out. So Rocks takes Daphne out for a late night walk and date. They have a moonlight dinner by knocking over the trash can behind a Chinese restaurant and have fun by frolicking in some mud, then they go home and wait until someone opens the apartment house door so they can sneak back in. Molly is determined that the family will spend Christmas together so she decides to pack up the kids and dogs in the car and drive to the mountain lodge where James is staying. It's a chilly, snowy evening and the car skids on the ice, coming to a stop on the side of the lonely mountain road. The car is stuck, so mom gets out of the car and a wolf appears in the woods and looks at mom and snarls. Rocks, in the car, growls and gets out to defend his family against the wolf. The two animals snarl at each other and a fight ensues, with each biting on the others neck.(???) This scene was shot in cuts with close-ups of the snarls. Soon the wolf runs off and Rocks comes back to the car, limping with his paw injured. The two dogs then decide that they are going to rescue the family. Daphne goes off in one direction to find help while Rocks goes in the other. Rocks finds dad, and when he does, he pees against Samantha's legs. Daphne finds a police car and brings the police back to rescue mom and the kids. As they make their way through the woods to where their family had been, they are confronted by several wolves. The wolf that Rocks defeated the first time has gone for help and brought his buddies, so there are three wolves that confront dad and Rocks. There are a lot of close-ups and cuts of wolves snarling and then leaping into the air, but you don't see any contact as they leap, presumably in an attack, but you never see any contact with another animal or person. The wolves are scared away when dad's beeper is set off during the attack. Thanks to their two dogs the family is reunited to spend a happy Christmas together. Look Who's Talking Now was filmed in Canada. A representative from the British Columbia S.P.C.A. monitored animal action.