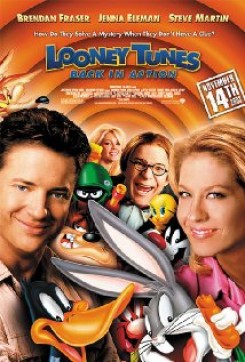 Having a suave movie star for a father has done little to pave the way for DJ Drake (Brendan Fraser), an aspiring stuntman whose dreams of action hero fame clash with his less than glamorous day job as a WB Studios security guard. Our tale begins with the smoldering embers of an age-old feud. Once again, a miffed Daffy Duck (animated) feels that all the good movie parts go to that hoity-toity Bugs Bunny. With his characteristic hot temper, Daffy heckles and hounds the studio executives – including Vice President of Comedy Kate Houghton (Jenna Elfman) – until someone calls security to escort him off the set. Never one to make a quiet exit, Daffy’s ruckus-raising eventually gets the duck and his hapless pursuer DJ fired. Stuck with Daffy as his new ever-present sidekick, DJ heads home only to discover a cryptic message left by his famous father Damian Drake (Timothy Dalton). It seems Damian has been kidnapped by arch villain Mr. Chairman (Steve Martin), head of Acme Corporation. Why? Because Damian knows the whereabouts of the mysterious Blue Monkey Diamond, a great and powerful jewel the Chairman would do anything to possess. Can DJ find the Blue Monkey Diamond and rescue his father before it’s too late? Will Daffy get erased from the cartoon pages? Will Wiley E. Coyote – agent for the Chairman – finally get one of his Acme anvils to fall on someone else’s head?

With the pestering presence of Daffy Duck, DJ chases enemy forces through steamy jungles and scorched deserts as he attempts to rescue his kidnapped father. He encounters monkeys and apes, and takes a remarkable ride on an elephant. In one scene we see DJ in a saloon dressing room with horses tethered in the background. Although cut from the theatrical release (it may appear in a DVD version), the horses take to the stage during a musical number performed by Heather Locklear.Detailed Animal Action - ExoticsEarly on in production, actors met with the animals and their trainers to receive the proper handling instructions and to insure the safety of all involved. In most instances, the number of takes was reasonable and did not stress or tire the animals.“Thai”, the elephant that appears to endure a CGI Daffy running up and down her body, is a veteran animal actor. Brendan Fraser worked with Thai in “George of the Jungle” and both felt comfortable working with and around each other in this film as well.While hunting for clues to the whereabouts of his father, DJ and Daffy travel to some exotic locales. Studio exec Kate joins the duo to persuade Daffy to come back to work, and on Monkey Island the threesome hitches a ride on Thai. While some green screen effects were shot, the filmmakers also had Thai carry DJ and Kate through jungle-like areas. In one sequence, she walked downhill on a leaf-strewn ramp padded with non-slip material. Two trainers standing off-screen cued Thai to walk, lower her head or raise it high. Between takes, Thai rested in a holding area where she had shade, feed, water and several toys to play with. After finding the altar that holds the Blue Monkey Diamond, DJ, Kate and Daffy encounter more jungle wildlife. A capuchin monkey sits on DJ’s shoulder then perches on his head and grooms him. The monkey rehearsed on a closed set with Brendan Fraser, who learned how to stand properly while the trainer gave cues from an off-camera location. BamBam, an orangutan, also appeared with Brendan Fraser in a scene where DJ holds the ape as it morphs into Kate. BamBam received cues from an off-camera trainer, and no more than six takes were allowed for these scenes before the animal stopped for rest, food and recreation.Back at Acme Corporation, the Chairman plots with his many accomplices and henchmen, and several Warner Bros. cartoon characters make an appearance to do the Chairman’s bidding. Meanwhile, the Tasmanian Devil, Yosemite Sam and Wiley E. Coyote try to foil the efforts of DJ and Daffy to rescue Damian and return the stolen Blue Monkey Diamond back to the temple. The Chairman also enlists the help of aliens who have a soft spot for puppies. The four Golden Retriever pups used for the production became acclimated to the set before any filming took place. Their trainer made sure that they felt comfortable and safe off set until needed as “huggables” for the aliens. The puppies played in their holding area and had plenty of food, water and rest. In an homage to the cat-loving villains that frequently appear in James Bond films, the Chairman’s favorite pet is a large chameleon that he strokes as he walks and hatches his evil plots. The reptile remained in his habitat between takes and trainers instructed Steve Martin in the safe handling of it before shooting any scenes.While most of the action involved interplay with cartoon characters, live animal actors added to the magic. Whether monkeys morphed into humans, elephants provided escapes, or puppies made aliens seem more human, the animal actors performed only those tasks considered within their skill level to complete safely. The CGI and green screen techniques kept them out of harms way, and trainers and Animal Safety Reps checked any costume, make-up or special effects to make sure that all the animals were safeguarded during their use.