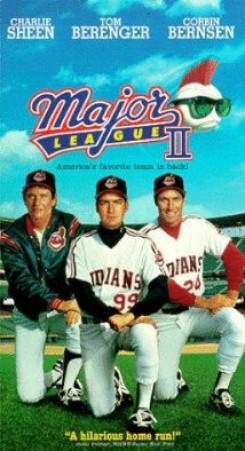 Major League II is a comedy dealing with the ups and downs of a baseball player, the women in his life and his attempt to change his image. Rick "Wild Thing" Vaughn is an ace pitcher who has lost his ability on the mound, but is more concerned with his new girlfriend/manager and her plans to make him a media mega-star. The rest of Vaughn's team, the Cleveland Indians, is also doing more poorly by the minute. One player has gotten into Zen, giving him an ultra- peaceful, passive demeanor, which is non-conductive to the demands of the game. Another player has just starred in a Rambo-like action movie, and while doing the stunts, injured himself badly for the rest of the season. There are many other obstacles for this team to overcome as they go from bad to worse. Through the coarse of events, the team becomes focused. Vaughn regains his sense of identity, his pitching talent, and the nice girl that he had left while under the spell of his agent. The team ultimately goes on to win the world series.

Animal action consists of a flock of pigeons flying over the ball park. A fly ball hits one of the birds, sending it crashing down onto the field. The Zen ball player picks up the bird and rubs it. The bird revives and the player releases it, tossing it gently into the air. The bird then flies up and away. The flock flying over the ball park consisted of homing pigeons released by the trainer. For the scene with the single pigeon, the actor released a tumbler pigeon, which flew to the handler off camera. Where the pigeon was hit by the ball, a real bird flew against a blue screen background. In seperate filming, a baseball was pitched against a blue screen background. The effect of the bird being hit by the ball was thus achieved by superimposing the film of the bird with the film of the tossed ball.