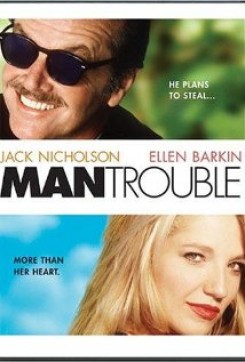 Comedy and suspense spice this story about the unlikely romance between a beautiful and refined concert singer and a down-on-his-luck dog trainer/guard dog agency owner. When Joan's apartment is ransacked by someone who obviously doesn't like her, Joan is frightened and she accepts her sister Andy's invitation to stay in her home while Andy is out of town. Andy, a writer, has a lovely secluded hillside home with a live-in maid and a security gate. However, when the gardener exhibits lecherous tendencies, the maid wants a day off, the gate is unreliable and the newspaper headlines read that a Westside Slayer of women is on the loose, Joan responds to a flyer left on her car windshield for a guard dog. Harry Bliss arrives with Duke, a trained attack dog, who demonstrates his special skills which delight Joan because she at last feels protected. During Harry's visits to train Joan to handle Duke, a romance develops. Harry's motives may be less than pure because Andy has written about Red Layls, one of the world's richest men and a former lover of Andy's. Red wants that manuscript and has given Harry $15,000.00 to get it from Joan. Red has also had Andy kidnapped but Andy has managed to phone Joan and let her know where she is. To complicate things further Joan is attacked by a hooded man who might be the Westside Slayer or might possibly be the someone who is out to get her.

Duke is present in much of the film and he immediately responds to Joan's warmth, becoming more than just a guard dog, but a loyal and devoted friend. For a phoney dog attack in which Harry is trying to train Joan in the proper handling of Duke, the dog was responding to his trainers hand and verbal commands. When Joan is attacked by the hooded assailant Duke barks frantically but cannot help her because he has been locked in the house. Again, he was responding to his trainer's hand and verbal commands. Duke's one bad habit is to hump Joan or her maid whenever he feels so inclined, which is often. This was trained behavior which the dog did on cue. Duke's original owner takes him back and gives Harry an identical German Shepherd. Joan is unaware of the switch and doesn't understand why the dog is not responding to her commands at a critical moment. Instead of defending her, the imposter dog urinates against a tire (The dog had been trained to lift his leg on cue). The real Duke refuses to be separated from Joan and Harry and escapes by jumping over a high fence and running through city streets at night until he reaches the concert hall where Joan is singing. The escape scene was shot in cuts. At first the dog paces back and forth approximately ten feet. This was accomplished by having the trainers on each side of the kennel each in turn calling to the dog. When the dog jumped over the high fence he was actually jumping off of a ramp over the fence onto another ramp. The ramps were approximately 4 1/2 feet high and the fence was 6 feet high. Camera angles made the fence appear higher. The montage of shots with Duke running through the city streets was shot in cuts at various locations with the trainer placing the dog in position and then calling to the dog as he ran from A to B. Puppies are seen at various times mostly as atmosphere at Harry's office where they are kept in a fenced in enclosure. Two small dogs are present in another scene where they bark throughout an argument that Harry is having with his estranged wife. For this the trainers placed the dogs into position and commanded them to speak at various times during the scene.