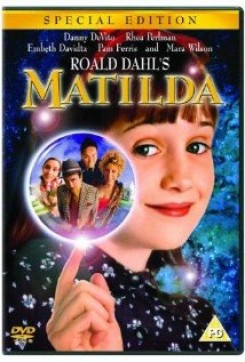 Matilda is a film adapted from the delightful novel by Roald Dahl. It is a story about an extraordinarily intelligent little girl born into a family of imbeciles. The Wormwoods', Matilda's parents, are not like most parents who cherish their children. The Wormwoods' were the total opposite, considering Matilda a nuisance. Matilda was reading and writing by the age of four and at the age of six and a half her parents sent her to school. However, they did not send her to an ordinary school but to Crunchum Hall Primary School. The principal, Ms Trunchbull, is a sworn child hater. She is known for throwing kids through the air or putting them in a closet called the "Chokey". As Matilda started school she noticed something new and strange happening to her. She could make objects do anything she wanted just by looking at them. This new discovery of powers led her to the decision if she can get rid of Ms. Trunchbull everyone's life would be much happier, especially Ms. Honey. Ms. Honey is a warm and loving person who happens to be Matilda's teacher and Ms. Trunchbull's niece. With the decision made to get rid of Ms. Trunchbull, Matilda starts to terrorize the woman with her special powers, until she eventually runs her off. The kids are happy, Matilda's happy, and the Wormwoods are happy because they finally get rid of Matilda when Ms. Honey asks for permission to adopt her. Matilda finally knows what is like to be loved and cherished.

There is a scene outside the school in the playground where the kids are seen holding a jar filled with water and a newt inside. Lavender, one of the children is seen placing the jar into her pocket before running up the stairs, entering the building. For this portion of the scene, trainer #1 placed the newt inside the jar and handed it to the actor. At the top of the steps trainer #2 was waiting to retrieve the newt. Later, in Ms. Honey's classroom, Lavender is seen putting the jar on the counter before going to her seat. It happens to be the same day that Ms. Trunchbull is supposed to teach the class. When Ms. Honey asks Lavender to go to the sink and bring Ms. Trunchbull's water pitcher and glass to the desk, she slips the newt into the pitcher. As Ms. Trunchbull is talking to the class, she pours water into her glass and the newt supposedly slips inside. She takes a big drink and as she swallows, she notices all of the children giggling. When she asks what is so funny, she follows their line of vision to her glass and notices the newt, happily swimming inside. The newt is never actually seen being put into the water pitcher. When the actor pours water into the glass, the newt is seen swimming around, but not seen floating into the glass. The newt stuck to the sides of the pitcher during filming of the shot. The trainer placed the newt into the glass. Three newts were used for this scene. They were exchanged every three takes. As Ms. Trunchbull notices the newt she starts screaming. At the same time Matilda starts to concentrate on the glass and it starts wobbling. The glass falls over and the newt goes flying through the air, landing on Ms. Trunchbull. She grabs the newt and throws it through the air where it lands on the over head lamp. The newt is then seen falling into a boys hands and it starts moving. A fake and a real newt were used for this scene. A real newt is seen in the glass and for a brief shot on the actor's shoulder and in the boys hand. A rubber newt was used for the segment of the newt going through the air when the jar falls, when the actor supposedly throws it, and when it lands in the boys hand. In another scene, Matilda and Ms. Honey are at Ms. Trunchbull's house when Trunchbull notices a black cat in front of her. She is afraid of black cats, so when the cat walks towards her she backs up and waves a rabbit's foot at it. Then she raises her leg and an awful thud is heard and the cat is seen flying through the air. The cat lands, screeches, and runs off. This scene was shot in cuts. A real and a fake cat were used. At no time is the actor ever seen coming into contact with the cat. When the cat is seen walking in front of the actor or running away after landing from the kick, the trainer released the cat using a buzzer to cue him with food as a reward. A fake cat was used for the portion of the scene where the actor supposedly kicks the cat and it flys through the air. The sound of the kick and the screech of the cat were inserted later in post-production. Later that evening Matilda goes back to Ms. Trunchbulls to retrieve something that the woman had taken from Ms. Honey. Trunchbull hears a noise and goes to investigate. Matilda notices the cat in the bushes at about the same time that the cat notices Ms. Trunchbull. The cat leaps out at the woman, landing on her chest. She knocks the cat away and it is seen running around the corner. This scene was shot in cuts. The cat was pre-trained to jump on the actor's chest. The trainer retrieved the cat after completion of the shot. For the segment of the cat seen running around the corner, a trainer cued the cat to his next mark with a buzzer and food as a reward.