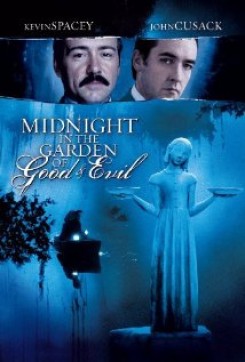 Midnight In the Garden of Good and Evil

Midnight In The Garden Of Good And Evil is a film based on the best selling true story of Jim Williams, a Savannah, Georgia antiquarian, who kills his gay lover.

A bulldog, supposedly the Georgia mascot, is seen throughout the film being walked on a leash, riding in a car, etc. For all of these scenes, the trainer placed the dog on his mark and cued him with verbal commands. Jim's pet cat is in several scenes sitting on the couch, in Jim's lap and walking A to B into the house from outside. There are a few scenes, where a local man walks around town and into establishments with horseflies strung on thread hanging around his neck. The flies crawl around on the top of his head and face and hands. For this scene, the trainer used bees without stingers instead of flies. Non toxic dissoluble glue was used to attach the bees temporarily to the thread, which hung loosely around the actor. The bees were promptly removed after the shot. Other animal action consists of a squirrel sitting on a park bench and dogs being walked on leashes throughout the town. There is a scene at a party where a woman is supposedly giving a Shetland pony a drink containing alcohol. In another scene a carriage horse and driver travel A to B down the street. The carriage and horse were obtained from a local professional carriage house.