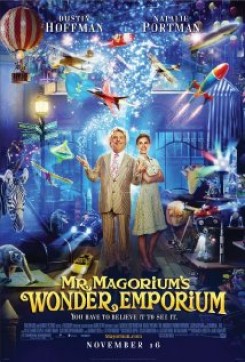 Mr. Magorium (Dustin Hoffman) is an eccentric, childlike, blissful old man who owns the most magical and incredible toy store in the world. When he tells his manager (Natalie Portman) that he is dying and is leaving the store to her, she begins to question her life and her belief in the unbelievable.

In several scenes in the film, Mortimer the zebra is seen throughout Mr. Magorium's (Hoffman) house. For these scenes, trainers led the zebra into position by a rope halter and lead, and removed the rope and lead before filming. When necessary, the trainers positioned the zebra using food and their own body weight. For the scene in which Mr. Magorium throws a ball in Mortimer's direction, off-screen crew members tossed lightweight plastic balls toward, but not directly at, the zebra. For the scene in which Mortimer is seen in the background backing up and out of frame, trainers cued him to "back up" and rewarded him with treats. For all zebra scenes, the area was thoroughly inspected, furniture was secured and all sharp or potentially hazardous objects were removed before filming. Only necessary cast and crew members were allowed on the closed, secured set. A nonslip pad was secured to the floor under the carpet. For scenes in which the zebra needed to be at a higher level, a ramp with a platform was secured onto the floor. The zebra was well-rehearsed to walk up the ramp and get back down with the help of trainers. He was rewarded with treats during rehearsals and between takes. A safety meeting was held before filming began.

A lemur climbs out of a magic book that is on the countertop of the emporium. For this scene, a hole had been cut where the lemur was to pop up out of the book. A trainer hid under the counter, holding the lemur. When the actress opened the book, the trainer passed the lemur through the hole, and another trainer served as a stand-in for the child actor in the scene. This stand-in trainer cued the lemur to jump onto his shoulder. The lemur was rewarded with dried fruit. For the scene in which the child runs around the store with the lemur on his head, the lemur had been gradually conditioned and trained for six weeks to sit on the trainer's head while he ran around. Once the lemur was accustomed to this action, the child actor was brought in and the lemur was placed on his head. In between takes, the lemur was equipped with a waist harness and leash held by the trainer. No food was allowed on set. A safety meeting was held before filming.

American Humane did not monitor all of the zebra action or any of the dog and goose action.