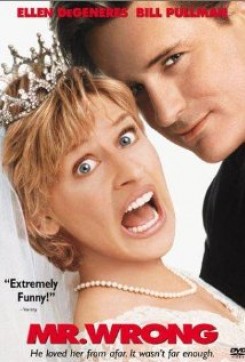 Mr. Wrong is a comedy about Martha Alston, a single woman living in the nineties, who thinks she has met Mr. Right. She meets Whitman Crawford on Valentine's Day and they go on a couple of dates and have a good time. She takes him to meet her parents and he is a perfect gentleman, however when they leave, he tells her he was just "presenting" himself for show. Martha, surprised, tells him he can be himself around her. He is relieved and soon she finds out that he is really a rude, obnoxious, and strange person. She wants to break up with him, but Whitman is persistent and he even breaks his finger to show her how much he loves her. To make things worse, Whitman's psychotic ex-girlfriend, Inga, begins harassing Martha. She rips up her sofa and puts gum in her hair, while she warns her to stay away from Whitman. Martha goes over to her mother's to house-sit and get away from the madness, but Whitman comes over dressed as a clown on stilts. She calls the police, but he is not there when they arrive and since he didn't do any physical damage, the police can't do anything, so they leave. After trying to soften Martha by sending her gifts and flowers, Whitman decides the only thing left to do is to kidnap her. He takes her to Mexico and tries to force her to marry him, but his plan is foiled when Inga, while aiming at Martha, accidentally shoots him.

In one scene Martha is talking to her parents in the backyard and two parrots are seen standing on a perch in the background. One of the parrots is seen again when Martha's father is in the backyard. The parrot is perched on his finger while the actor is feeding him. The actor had been coached by the trainer prior to shooting on how to handle the parrot. Martha is a talent coordinator for a fictional talk show and as she arrives to work one day, she finds one of the guests has a monkey which is hanging from the light fixture. The monkey had merely been placed on the light fixture by the trainer and told to stay. Another monkey is seen being carried across the room. In one scene, Inga is holding a jar with a black substance inside, which is supposedly dead ants. In reality these were not real ants, but something the prop department created. Martha is put in a Mexican jail for allegedly shooting Whitman. Her friend Walter helps her escape. They evade the police and are met by Inga's current boyfriend who is waiting for them. He feels bad that Martha got blamed for what Inga did, so he decides to help her. He has a white horse next to him that is saddled and ready to ride. The wrangler positioned the horse and Walter, who had an injured ankle, got on the horse as Martha walked beside him and together they walked into the sunset. When Martha is receiving flowers and gifts, a woman is seen walking her dog in the background. Also, cattle, goats, chickens, and a mule are seen in the background when Martha and Whitman are in Mexico.