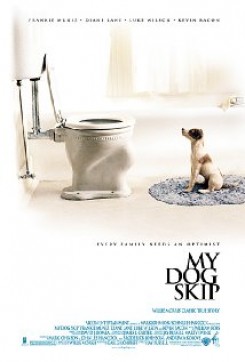 A delightful family film based on a true story by the late Willie Morris, about a boy named Will who gets a dog for his ninth birthday. They become best friends. The cute little dog helps Will get through the struggles of his childhood and they learn a lot from each other.

Skip the dog is played by Enzo, who has had previous experience in front of the cameras. If you have ever seen the television sitcom, "Fraiser", you remember the little dog on that show, Eddie (Moose). Our star Skip (Enzo) has stepped in for Eddie on occasion, so it seems only fair that in the ending sequence when Skip appears to be older and more tired, it is Eddie playing the elderly pet. The two Jack Russell Terriers are not only friends, but co-stars that work very well together.

There are numerous scenes where the trainer has used a combination of verbal and hand commands to have Skip move from point A to B. The dog is seen often throughout the film, walking with the actors or by himself.

Skip appears to be driving a car in one scene. In actuality, his trainer verbally cued Skip to put his paws on the steering wheel of a parked car. The steering wheel was then moved ever so slightly by the actress who plays the mom. She and the young boy were seated next to Skip in the car. In post production, the editor made it look like the car was moving down the street when it really never moved at all.

When Skip and Will run across a couple of moonshiners in a cemetery, it appears as though Skip attacks one of the men. This was achieved by hiding Skip's favorite toy inside the crate that the man was holding. Skip was really jumping up enthusiastically trying to get the toy.

When Will and his dad are out in the woods and they come across a deer. The deer is not only the trainer's pet, but was raised by him from birth. Along with the trainer and his deer, the cameraman went out to the wooded location and filmed the deer wandering and grazing. After awhile the deer laid down on the grass to rest. With the help of editing and slow motion filming, it appears as if the deer had been shot. A fake deer with fake blood replaced the live deer to film the end of this sequence.

There are two separate scenes where it looks as though the dog is being hit. First by the young boy with his hand and another time by a man who lifts a shovel to hit the dog. Don't worry, a stuffed dog stood in for our canine star. Afterwards, the real dog was put on his mark by the trainer and the rest of the scene was filmed. After the shovel incident we find Skip lying on the table at the vet's office. He has a cover over him and lies breathing heavily with his eyes closed, as he is given verbal cues by his trainer. When he awakens he is told to open his eyes and lick Will's face and he happily obliges.

Everyone who has ever owned a dog knows they are very curious about toilets. No matter how big a bowl of water you put out for your dog, he is always curious about how the toilet water must taste! Skip is no exception! In the movie poster, Skip also seems curious about the toilet. In several scenes we see the dog staring at the toilet and then trying to jump up. Finally, Skip drinks from it. The trainer used hand signals off camera to get Skip to jump up onto the toilet and take a drink. Surprisingly, the toilet had no water in it, only a treat waiting for Skip.

In another scene, it appears that Skip is thrown over a fence by an actor. A special platform was built on the unseen side of the fence. The actor held Skip in his arms and up to the fence. Skip jumped out of the actor's arms as his trainer cued him with hand signals. Skip landed on the unseen platform where the trainer is standing to spot his landing.

During a training scene, there is a dummy that is hanging on a wall and used to show people how to fight off an attacker. Skip decides to become part of the group of trainees and runs up to the dummy, grabs it by the crotch, shakes it and tugs vigorously. The trainer gave Skip hand signals to prompt the dog to attack the dummy. The same hand signals were used when we see Skip grab a ball in his mouth during an earlier scene. The dog was rewarded with a treat after each scene was filmed.

Although Skip is certainly the most memorable animal in this film, there is also a squirrel that runs up a tree, a parrot that talks after being cued by his trainer off camera and some dogs lying around or walking in the background during various scenes.