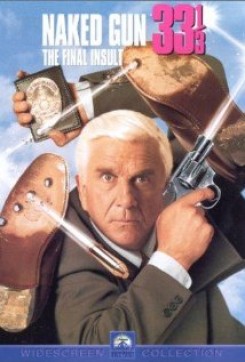 Naked Gun 33 1/3: The Final Insult is a zany, slapstick comedy. This is supposedly the final installation in the Naked Gun series. Nielson reprises his role as the hapless police detective who, in this episode, is drafted back into service from his retirement to help fight a terrorist gang. Through his undercover work, he foils their plot to blow up the Academy Awards presentation.

One scene with animals takes place inside prison and consists of two dogs on the telephone, on opposite sides of a glass partition. This is a fairly quick shot. For this shot, two trainers sat under the dogs' chairs holding fake paws which held the phone receivers. In another scene, a pigeon is depicted being sucked up into an exhaust fan in the window of a hide-out cabin. This scene was shot in cuts. The pigeon's wings were clipped so that it would not fly away and the actor tossed the bird, which flew a few feet, to a waiting trainer who was just off camera. Loose feathers being blown by the fan give the illusion that the bird has been sucked into the fan. In the only other scene including an animal, a bird is shown flying across the sky in the distant background.