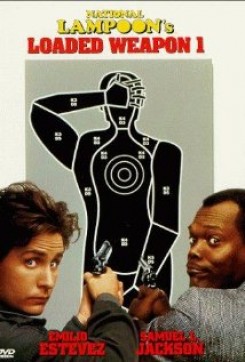 National Lampoon's Loaded Weapon is a sometimes hilarious spoof of the Lethal Weapon adventure/comedy series. The format for this cop-buddy film is Naked Gun, with plenty of sight gags strung together with a very thin thread of a plot. Police Sergeant Colt is a jaded Viet Nam vet who is in a blue funk because he can't stop grieving over the loss of his partner, Claire, a Golden Retriever. He's called to a home where Police Sergeant York was shot and killed by a Wilderness Girl, a girl scout selling cookies laced with cocaine. Sergeant York was murdered shortly before she was to meet with her partner, Sergeant Luger to tell him about a major drug deal. Before she died, York managed to hide evidence important to the case. Luger is about to retire and now mourns the loss of his partner. He and Colt are assigned to this case in which the new pair must unravel the connection between the Wilderness Girls and a drug czar.

In one of the many sight gags, the tough drug czar puts his head into an aquarium filled with Piranha and comes out with one of the fish in his mouth. This scene was shot in cuts using fake and real fish. The real fish were not Piranha but Red-Bellied Pacu. The fish in the man's mouth was a fake. At the sight of a crime scene, a luxurious mansion in the hills, Colt meets with a dog and the pair immediately hit it off and do some serious bonding. They romp and play and kiss. To achieve this scene, a trainer held the dog off-camera and on cue released the dog as a second trainer cued the dog to go to Colt and to jump up. Colt petted the dog and kept the dog with him by giving the dog food. A trainer stood behind Colt and with verbal and hand cues told the dog to do the proper behaviors. When the dog busily digs a grave for her former master, the dog is responding to her trainer's verbal commands. The dog seen clinging to Colt is a fake. As Colt visits with Sgt. Luger and his family at their home, a variety of animals appear. While they are seated at the dining table, the slobbering family pooch drools and plays footsy with Colt under the table. To achieve this, trainers put eggwhite on the dog's mouth to simulate drool and gave the dog appropriate verbal and visual commands. A fake dog's foot was also used. The same fake paw was used when the paw trips Colt. At one point a cat jumps out on Colt and shortly afterwards several chickens fly out at him. A total of six trainers were used for this scene. They positioned the animals and released and received them at appropriate times giving both verbal and visual commands to the animals. In a flashback scene, a much younger Colt plays with Claire on a beach. Claire holds a container of barbecue lighter fluid in her mouth. When the fluid is squirted on a barbecue fire, the barbecue flashes a big puff of smoke obscuring the scene. When the smoke clears, a soot-covered, bald Colt and singed Claire can be seen. This scene was shot in cuts. An empty container of charcoal fluid was placed in the dog's mouth. The dog was given voice commands by her trainer. The dog was not close to the barbecue when it "exploded" which was more of a visual effect than an actual explosion. Afterward makeup and soot were rubbed on the dog to give her a dirty appearance. A fake hairpiece was attached to the dog's fur to simulate singed fur. Colt is reunited with Claire when he discovers her chained in a dungeon where the drug czar has been keeping her. For this scene a metal chain was attached to a wall and two metal cuffs were softly lined for the dog. The cuffs were attached to the dog's legs very loosely and the dog was able to step out of them at any time. The trainers then cued the dog off camera to stay. In between takes the dog was taken outside and removed from the lights. In two sight gags a hamster is seen on a treadmill and a beaver is sitting in a chair. A real hamster was merely filmed on a treadmill and this was used as an insert shot. The beaver seated in the chair was a fake.