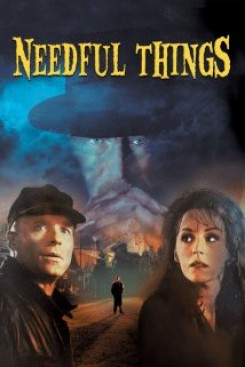 All "hell" breaks loose when the Devil comes to the town of Castle Rock and opens his new store; Needful Things. Castle Rock is a small peaceful town, until it receives a new tenant; Leland Gaunt. Mr. Gaunt opens an antique store that seems to have one object in it for each resident of Castle Rock that they just can't do without. He sells these things to their perspective owners for a small monetary amount and a "favor". Each favor is a different trick or prank that is to be played on another member of the community. These little requests get progressively more violent, with murder being the final outcome. Chaos continues to erupt throughout the town as the Devil, Mr. Gaunt, continues to pit friend against friend in his relentless drive to own all of their souls.

Animal action scenes are minimal. A waitress at the local diner, Nattie, owns a dog, Raider, who is present in a few scenes. He is seen being walked on his leash, barking, being petted and hugged, and lying on the kitchen floor. In one scene Hugh, one of the townspeople, breaks into Nattie's house while she is away. Raider barks and meets him at the door. The man tells the dog to sit and then begins to pet him. As he is petting the dog he takes out a pocket knife. When Nattie returns home she is horrorified to find Raider's dead, skinned body hanging from the light fixture in the closet. This was a fake animal that was made for this film. Hugh never actually takes the knife to the dog. One of the townspeople owns a turkey farm. Turkeys are seen milling about in their pen, being fed, and one turkey is carried by a man.