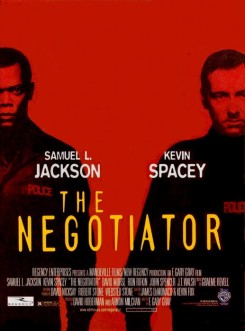 In a desperate attempt to prove his innocence, a skilled police negotiator accused of corruption and murder takes hostages in a government office to gain the time he needs to find the truth.

There is a scene at the beginning of the film where Danny is trying to talk a man into giving up his hostage. Inside the apartment a pit-bull is attached to a lease and the other ends are attached to a radiator. The dog barks and lunges as the men are talking. The trainer placed the dog on his mark and off camera cued him with verbal and hand commands.

Other animal action consists of police dogs on leashes at a checkpoint.