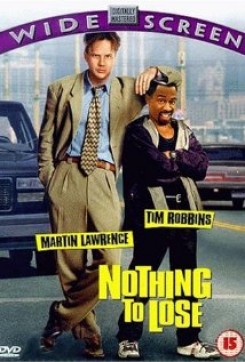 Nothing To Lose is a film about Nick, a happily married man, or so he thinks, until he comes home early one day from work to find his wife in bed with another man. He leaves his house and drives randomly through the city. While out driving, Nick is held up at gun-point by T. Paul, a street hood looking for a quick buck. The results from the their meeting and the events proceeding it will change both their lives forever.

When Nick is proceeding down the street at a high rate of speed, a man with a dog on his leash is seen crossing the street. The man is seen pulling on the dog's leash, heading towards the corner. For this scene, a stuntman walked the dog on his leash. A master shot was filmed of the dog with the vehicle at a distance and later insert shots of just the dog were filmed. There is another scene where a dog is seen sitting in front of a restaurant. The dog was placed on his mark and given a verbal command to stay. In another scene a spider is seen crawling on Nick's head and face as he sits in his truck. He jumps out of the vehicle, shaking his body to relieve himself of the spider. The spider is seen crawling on his head and face, however, the spider is not seen on the actor when he is attempting to shake it from his body. The trainer placed the spider on his mark and retrieved him at completion of the shot. Later two rats are seen crawling around a few trash cans in an alley. The rats were released by the trainer for the establishing shot and retrieved at completion.