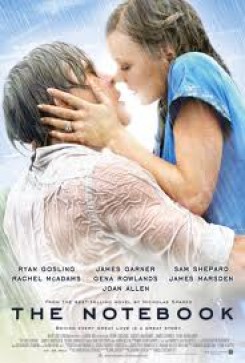 Adapted from the celebrated novel by Nicholas Sparks, The Notebook charts the journey of a young couple torn apart by societal and family pressures, only to reunite 14 years later after their lives have taken very different paths. The story, told in a series of flashbacks, unfolds in a nursing home as an elderly man called “Duke” (Garner) reads from a worn notebook to Alzheimer-stricken Allie Nelson (Rowlands). By the end of the film, it becomes clear that Allie is the woman in the story and the narrator, her suitor.

Avian Action
The film opens as dusk falls and a silhouetted figure rows across Black River. Older Allie gazes out the window at the man and watches as hundreds of tundra swan and Canadian geese fly by her window. This scene mixed computer generated images with documentary-style footage shot by a game warden from the South Carolina Department of Natural Resources. Similar footage also appears in the final scene of the film.

In one spectacular scene, young Noah (Ryan Gosling) takes Allie (Rachel McAdams) for a ride in his row boat amid hundreds of swans and geese that float so closely together they literally blanket the water. While some of the action was filmed in front of a green screen, this complex sequence required 110 days of preparation for just one day of shooting. To create this avian aggregation, trainer Dan Hydrick supplied a mixture of more than 300 Embden geese, mute swans, and Pekin ducks. Hydrick purchased the geese and swans as adults, so they had already bonded and acted as one personality, which is common with birds. The approximately 280 Pekin ducks, however, came to the trainer as ducklings. In order to accustom the birds to the row boat, their trainer would place the birds in the water and then glide across the pond in a canoe. He also used small electric boats to practice corralling them in sections of the lake. During the training period, a vet came out every week to check on the birds, and the production had three vets on set during filming.

Background Animal Action
A scene at the lumberyard shows a cart with two mules hauling logs. Trainer Dan Hydrick doubled as the actor driving the cart. In another brief scene, Lon and Allie ride horses on the beach. Hydrick gave both of the actors riding lessons, and in the final edit, the horses are mostly below frame and barely visible.