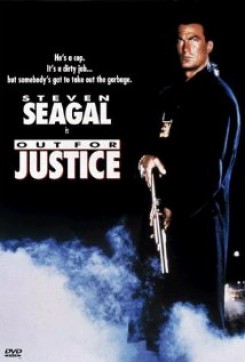 Out For Justice is one of the bloodiest and most violent films to be seen anywhere. It begins when a policeman is gunned down in a New York City street in front of his wife and children. The neighborhood is Italian. The policeman was Italian and the police detective who is called in to find the murderer is Gino, a childhood friend of the victim. Gino is told by the head of the mob, also Italian, that the murderer broke the Italian code by killing in front of family and must be taught a lesson, "That is the price of our blood." Gino obviously belongs to some special police unit because he never wears a uniform, has total disregard for the way he drives vehicles, and goes after the villains with a vengeance that must violate every law enforcement code of ethics. Apart from the blood and violence, the film is also rife with foul language.

Gino has a soft side which he exhibits when he stops to examine a plastic bag that is dumped out of the car in front of him. When he opens the bag he finds a puppy which he rescues and handles tenderly. (No dog was actually in the bag that was tossed from the car.) The dog is seen several times afterward, but is never present during any violent action.