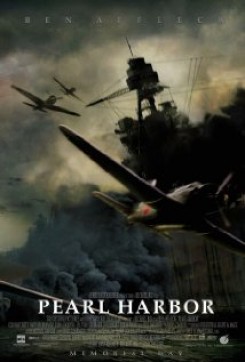 Set against the World War II backdrop of Japan`s attack on US naval forces at Pearl Harbor, this drama follows two friends in love and war. Rafe McCawley (Josh Hartnett) and Danny Walker (Ben Affleck) are flyboys: one an aviator in the U.S. Army Air Corps, and the other, in the British Royal Air Force. These allies find themselves in love with the same woman (Kate Beckinsale) while fighting a common enemy.

The Presidential Pooch: There are two scenes in the film where President Roosevelt (Jon Voight) is giving speeches and his trusty dog is by his side. The human actor and the dog actor became acquainted with each other before filming began. After handing the actor the dog for the scene, the trainer stood just off camera for moral support. The trainer retrieved the dog afterwards and rewarded the dog with an edible treat. The Military Mascot: A cute Jack Russell Terrier named Blinky befriends some of the soldiers and is shown in two scenes where the soldiers are on ships under attack. In the first scene, a soldier holds the dog inside his coat. We hear a shot and see the soldier slump over but the dog runs off. The actor and the dog met before the filming to get acquainted with each other. Although it looks as if the boat is in the ocean, the scene was filmed in a large water tank holding only four feet of water. The trainer handed the dog to the actor who placed it inside his coat. When the actor slumped over, the trainer verbally cued the dog to run off camera where an edible reward was waiting. The gunshots were added later, in post production. The second time you see Blinky, he is swimming to a ship of soldiers who help the dog to safety. A trainer in a wet suit stood in the tank and released the dog, cuing him to swim to the boat. Once the dog reached the boat it hopped up into the arms of several actors and another trainer who helped the dog aboard. Sporty Dogs: There is a brief scene in which a dog runs through a courtyard, pushing a ball with its nose. The trainer verbally cued the dog to run while pushing the ball. Since playing with the ball is one of the dog`s favorite things to do, the dog was very happy to oblige and was rewarded with a treat at the end of filming. During a boxing match, a sailor is shown holding a small dog as he watches the fight. The actor and the dog were introduced before filming began so both were comfortable in the crowd of rowdy fans rolling with the punches. Although the trainer handed the actor the dog , he stood just off camera to retrieve the dog after the scene was filmed. Dogs at Bay: In the beginning of the film we see a huge Bullmastiff lying on a dog bed in the office of Dolittle (Alec Baldwin). When Dolittle raises his voice to get his point across, the dog is shown raising his ears. I had the pleasure of meeting this loving dog named Mason when I went to the screening of the film. The dog`s guardian is director, Michael Bay, who also is the guardian of a second 11 month old Mastiff named Grace. The dogs accompany him to the office on a regular basis. Mason is 5 years old and weighs in at 250 pounds. He has his own spot in the office where his bed and favorite toys are kept. This was Mason`s movie debut, however I am guessing it is just the beginning for this pooch! Chickening Out: Outside the motel that the men are staying at we see some chickens pecking around the courtyard. The trainer put some chicken feed down and released the chickens. They concentrated on the food and never even noticed they were being filmed. The trainers retrieved the chickens when the scene was over.