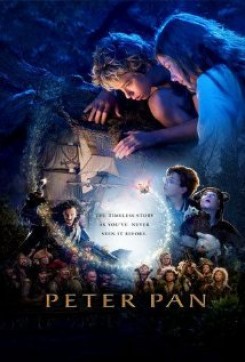 Peter Pan, J. M. Barrie's classic tale of adventure and dreams, has thrilled audiences around the world since it premiered on a London stage a century ago. Set in Edwardian London, Wendy Darling regales her brothers each night with tales of swordplay, swashbuckling and the fearsome pirate Captain Hook. The children become part of an even more thrilling fantasy when Peter Pan flies into their nursery and guides them over moonlit rooftops to the magical world of Neverland. Wendy and her brothers join Peter and the Lost Boys in an exhilarating life free of grown-up rules, but must also face the inevitable showdown with Hook and his bloodthirsty pirates.

Three different Saint Bernards – Rebel, Bomber and Winston – alternately played the part of "Nana". All three of the dogs met the cast and crew ahead of time so everyone felt comfortable. The dog appears in many scenes following family members around, sitting with them, and lounging on the bed or in the large doghouse specially made by production to comfortably house the plus-sized pooch. Since all of the Darlings refer to the dog as the nanny, each Saint Bernard happily sported a comfortable, custom-made bonnet.

When Peter Pan flies through the nursery window, an ever-protective "Nana" emerges from her doghouse barking and chasing Peter and his separated shadow all around the room. The dog jumps at the shadow on the wall and then jumps again at Peter, pulling his suspender as the boy escapes out the window. The actor, suspended on a cable, was slowly pulled out the window while a trainer handed the dog the end of the suspender. "Nana" followed the trainer's verbal cues and hand signals to run around the room, jump up and bark. The dog released the suspender on the trainer's verbal cue and the actor continued out the window on the cable.

In a scene where Michael (Freddie Popplewell) refuses to take a bath, "Nana" follows the boy down the hallway, puts her head between his legs and picks him up on her back, giving him a ride into the bathroom and dumping him into the already-drawn bath. Nana then stands near the tub licking his face. To pull off this action, the production crew built a frame over a tread mill and the young actor crouched down on top of the frame as the dog ran on the treadmill below. Though a bit hard on the actor's legs, the dog had a great time. For the next part of this scene, the actor wore a harness attached to a cable that allowed him to hover over the dog as it was pulled to the bathtub on a biscuit. This movie term refers to a rolling pad towed by the trainer off screen. Although it appears the actor rides on the dog, the actor is actually moved by the cable slightly above the dog and very little weight burdened the animal.

"Nana" later follows Wendy through crowded London streets jammed with people as well as horse-drawn carriages controlled by costumed trainers. As they enter a bank, the dog slides on the floor and into Wendy, who ends up on top of "Nana's" back. Production used the dog named Bomber to execute this sequence; however, trainers prepped all of the animals just in case. One trainer released the dog, who followed the actress and the verbal cues and hand signals given by trainers standing off camera. Rehearsals for this scene took place on the smooth plastered floor of a barn. The dogs had a blast learning to slide on this floor, which trainers sprinkled with talcum powder to make it more slippery. In order to ensure that "Nana" went in the right direction throughout the sequence, trainers once again had the dog sit on a biscuit controlled off screen. The props department also built a stuffy version of the dog that had wheels on its legs. The stuffy was used when the dog crashes into people or things as it slides, and all the action got edited together in post production.

In another scene, Mr. Darling (Jason Isaacs) takes "Nana" by the collar and chains her outside in the snowy yard. He removes her hat and takes away her honorary title of nanny. The dog barks and jumps up at the wall until the chain breaks and she bursts out of the gate and takes off down the empty street. "Nana" crashes a party attended by Wendy's parents and runs up to them barking as they mingle in the crowd. The dog later bursts through the front door of the family home and runs up the stairs, still dragging the broken chain. For this sequence, the actor took the Saint Bernard by the collar as instructed by the trainer before filming began. Though the actor does attach the dog's lightweight chain to the wall, what really keeps "Nana" in place is the off-screen trainer using a combination of hand signals and verbal cues to get the dog to stay, bark and jump up. Another off-screen trainer used similar commands to get the dog to run up to the parents at the party and to run up the stairs of the family home and to the window of the nursery. The production manufactured the synthetic snow blanketing this set, and "Nana's" chain consisted of a lightweight plastic material that didn't bother the dog at all. Once removed, the dog enjoyed an edible reward and lots of rest.

The life-like parrot and crocodile appearing in the film were pure movie magic.