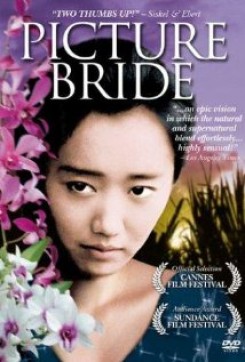 Picture Bride is a heartfelt drama that portrays the frustrations and friendships of the young Japanese women who chose arranged marriages via an exchange of photographs. This particular story focuses on one woman, Riyo, who travels to Hawaii in 1918 to meet her prospective matched mate just after her father has died. Upon her arrival, Riyo is disappointed to find that her future husband used an old photograph and is actually decidedly older than she. He turns out to be forty-three years old, just her father's age at his death. However, this is only the first of many disappointments to confront Riyo. She begins to learn how painful it is to be a worker on a plantation, both physically exhausting and emotionally depleting. She is befriended by another picture bride who is a victim of spousal abuse but has a baby that she cherishes. Together with her new found friend, Kana, Riyo learns to do extra work washing clothes for the white plantation managers. She dreams of earning enough money to journey back to Japan. As her story unfolds, we see her husband's frustrations as well as her own. After the untimely death of Kana, Riyo tries to run away but cannot bring herself to desert the other women who have come to rely on her strength. Slowly she and her husband find ties that bind them and also find love for each other as well.

Animal action in the film is very mild consisting of horses, a centipede, a hawk and donkeys pulling carts. The most dramatic scene is one in which the plantation managers and workers prepare the cane fields for burning. As the fire is sweeping across the fields, Riyo's friend, Kana, realizes that her baby has wandered into the path of the flames. As Kana runs into the encompassing fire, we see a close up of one of the plantation bosses on horseback as he looks on helplessly. The scene was shot in cuts and the horse was over twenty yards from the fire which was controlled by a firecrew and fire bars. The scene was filmed with a long lens which makes the animal and the people appear to be closer to the flames than in actuality. In other scenes where the foremen are seen on horseback, the riding is very mild. In an earlier scene, when the Japanese women break for lunch in the fields, we see them jump at the sight of a centipede and supposedly crush it underfoot. This scene was also shot in cuts. First we see the centipede crawling along the ground, then see a close up of the actor jumping, and finally we see a wider shot of someone stepping on the insect. We never actually see the insect being crushed. Later in the film, there is a scene when the women are walking home from having delivered some laundry and we see a shot of a hawk circling in the sky. This was a pick-up shot, filmed on location in the bird's natural habitat. The American Humane Association was not on the set during filming, but had conferred with the producer before, during and after principle photography.