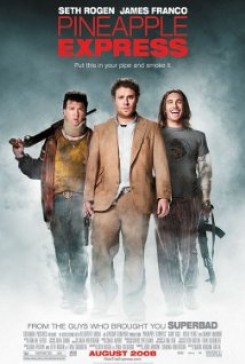 A stoner (Seth Rogen) witnesses a murder by a police officer and turns to his drug dealer (James Franco) for help. When these two hapless and clueless potheads go on the run from the criminals, chaos ensues.

The general and the agent enter a lab in an underground facility where scientists are conducting various experiments. A turkey stands on a table and squawks. A chimp sits on a desk. Trainers placed the turkey on a wooden crate in an enclosed room, and he stayed on his own. Two trainers stood nearby as a precaution. The turkey was retrieved and returned to his home immediately after filming. A trainer doubled as the scientist sitting at the desk with the chimp on it. The chimp was cued to perform the mild sit-and-stay action. Only necessary cast and crew members were allowed on set.

While Dale is in the woods at night, a large moth flies in front of his face as he swats at mosquitoes. The moth was filmed in its natural habitat — it just happened to enter the scene. The actor's exaggerated gestures and the shadow from the flashlight made the moth appear bigger than it was.

American Humane also monitored some squirrel, dog and cow action that was cut from the theatrical release but may appear in the DVD version.