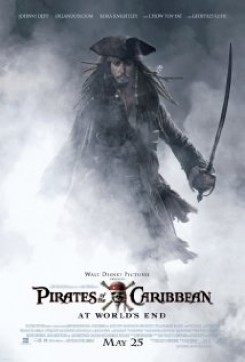 Pirates of the Caribbean: At World's End

In this third installment of the "Pirates" trilogy, the crew find themselves on a trip to the World's End in an effort to rescue Jack Sparrow (Johnny Depp) and save the world from an evil alliance brewing in Davy Jones' Locker.

A goat is on a bridge and several animals are in cages as a boat passes by. A man cuts dead fish on the dock. The goat was released by one trainer and called to another trainer at the end mark. The goat was rewarded with food on completion of the action. The animals were comfortable in the prop cages and trainers remained close by. Production provided documentation proving that the dead fish was either fake or bought at a market and not harmed for the purposes of production.

Some birds sit in cages on a cart. A parrot sits on top of a cage and we see a capuchin monkey turning the handle of a grind organ that is also on the cart. Some birds fly off the cart and then we see the cart explode. This scene was filmed in separate shots. The animals were comfortable and safe in their individual cages. The trainer placed the monkey on its mark with its hands on the handle and verbally cued it to follow the circular motion of the mechanically operated organ. The monkey was well-trained and comfortable with this action. The birds seen flying away at the time of the explosion were released by a trainer and flew to a second trainer off camera. All animals and humans were moved safely away prior to the cart exploding. Further special effects were added in postproduction to give the appearance of people and animals fleeing from the huge explosion. Two monkeys, Pablo and Chiquita, were alternated throughout the film in the role of the monkey. The monkeys were introduced to and comfortable with the necessary cast and crew.

Men crawl through a cavern with large rats. Peanut butter was smeared on the ground to encourage the rats to nibble at the ground and surround the actors. The actors were very careful when crawling around the rats. The trainer released the rats right before filming began and collected them at the end of each take.

A monkey places a rocket on a dock, lights it and excitedly watches it fly off. A parrot sits on a barrel watching. This scene was filmed in separate shots. A stuffed bird was placed on top of the barrel. The trainer placed the monkey on its mark and verbally cued the monkey to "go" and "pick up" the rocket. The trainer used a laser pointer to direct the monkey on where to put the rocket. The trainer lit a non-drip wax candle and handed it to the monkey right before shooting began. The monkey was verbally cued to "hold it," hop onto a short, secured box and touch the candle to the wick of the prop rocket. The monkey naturally stepped back when the wick was lit. The candle was immediately retrieved from the monkey and extinguished at the end of each take. The trainer verbally cued the monkey to raise its arms and jump up and down. The monkey was well rehearsed and comfortable with the required action. The entire area was wet down and fireproofed as an extra precautionary measure to ensure the safety of both the animals and people on the set.

A couple of men covered in ice and snow are shivering while sitting on the deck of the boat in winter. The monkey, also covered in ice and snow, sits and shivers next to them. Light costume pieces and nontoxic makeup were applied on the monkey right before filming began to give the appearance that it was very cold. The trainer placed the monkey on its mark on top of the barrel. A food stick was used to direct the monkey on which direction to look. A small vibrating pad was placed on top of the barrel. The monkey was secured with a waist tie to ensure its safety while sitting on top of the lightly vibrating barrel. Snow was created with burning, tightly rolled paper blown into the scene. The monkey was trained and comfortable with the waist tie and vibrating pad, and remained a safe distance from the burning paper.

The monkey slides across the deck of the ship in a bucket. The monkey was placed in the bucket by the trainer. A second trainer pulled the bucket with an attached cord. The monkey enjoyed the action so much that he would shake the bucket impatiently after each take, awaiting his next ride. Creative camera angles made the slightly sloped set appear much steeper. The monkey remained a safe distance from foam prop debris used in the scene.

Jack (Depp) walks past, sits next to and stares at a goat. The trainer placed four apple boxes on set and placed the goat on its mark on top of the secured boxes. Food was used to encourage the goat to "stay" and "look" in various directions as needed.

Cotton (David Bailie) has a parrot on his shoulder during several scenes both on and off the ship. Sometimes the bird flaps its wings as it rides on his shoulder. Cotton is seen riding in a smaller boat and the parrot is on his shoulder. In one scene, the bird flies off his shoulder and out of camera range. "He's abandon ship," Cotton says. Two birds, Chips and Salsa, were alternated for scenes throughout the film. Both birds were comfortable with the short necessary flights, most of which were done in a blue screen setting. When sitting on the actor's shoulder, birds were secured to the actor's wardrobe with a safety line. The animals were introduced to and comfortable with the actor. The actor was instructed on the handling of the birds.

The monkey holds a scroll and watches rocks turn into crabs. The monkey was handed a prop scroll and placed on its mark by the trainer. The crabs were later created using computer generated imaging (CGI) in postproduction.

The monkey rides on Barbossa's (Geoffrey Rush) shoulder as he walks. It then jumps off, inspects some beads in the sand, and then climbs back up to Barbossa's shoulder. This scene was filmed in separate shots in front of a blue screen. The monkey was put on its mark by a trainer and verbally cued to achieve the action. A second trainer in costume doubled as the actor. Padding was placed in the costume for the animal's comfort and to encourage him to return to the same position on the trainer's shoulder.

The monkey is shown in a cannon and then flies out as the cannon is lit. The cannon was a prop built by production with an opening in the underside of the barrel for the monkey to enter and exit. Apple boxes and a ramp were secured beneath the opening for easy access. The monkey wore a waist tie that was held by an offscreen trainer to control the monkey's movement in the barrel. An offscreen trainer stood behind the camera and used verbal cues to get the monkey to look and move in various directions. Only necessary cast and crew were on the closed set. The actual flight of the monkey from the cannon was achieved using CGI.

During a rainstorm, the monkey jumps up, grabs a rope on the sail that Jack and Elizabeth (Keira Knightley) are holding, and flies above the ship. Then we see all three of them climb up the side and onto the boat. This scene was filmed in separate shots in front of a blue screen. One trainer released the monkey while another trainer stood on a ladder. The rope was secured to the ground and the trainer on the ladder held the other end of the rope. The trainer called to the monkey and the monkey grabbed the rope and climbed up to the trainer. The monkey received a treat upon completing the action. The rope was then secured at the top and hung down. The trainer placed the monkey at the end of the rope and gave it a verbal cue to "swing." The monkey wore a waist tie that allowed the trainer to control its movements. The ledge of the boat was filmed in front of a blue screen. The monkey was placed on an apple crate by the trainer and called to "come" to another offscreen trainer. The monkey was sprayed lightly with warm water to give the appearance it was in the rain. It was retrieved by the trainer immediately after filming and dried off. The rain was later added in postproduction. A stuffed monkey was used for the actual flight.

In one scene, we see the parrot and the monkey sitting on the deck, wet. Both the parrot and monkey were lightly sprayed with warm water for this scene and dried off in between takes. The monkey's costume was layered to prevent the slightly damp clothing from being right against its body. Trainers located just off both sides of the camera tossed water toward the parrot, but away from the monkey. The parrot was verbally cued to shake off the water. This scene was shot inside a soundstage to ensure the animals' warmth and safety.

Men aim guns at each other, and the monkey aims a gun at the parrot. This scene was shot using a split screen. The monkey was placed on its mark in a "stay" position by the trainer. The monkey was then handed the prop gun. A point stick was used to direct the monkey to aim toward the spot where the parrot would be positioned later. The monkey was very comfortable with the lightweight prop gun. The parrot was secured to the actor's wardrobe with a line. The monkey and parrot were filmed separately and edited together in postproduction.

Jack asks some of the crew aboard the ship if anyone missed him. A few men and the monkey raise their hands. The monkey was placed on its mark by the trainer and verbally cued to raise its hand.

Seagulls were brought to the set by a trainer and placed on "dead" bodies seen in the film. The seagulls shown flying in various scenes were local wildlife caught on camera behaving naturally.