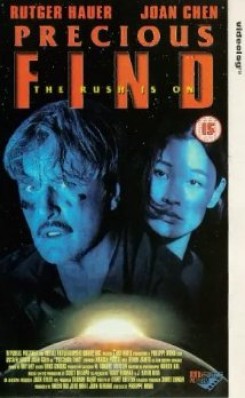 Precious Find is a futuristic film about Ben, a young unemployed prospector who can smell precious (gold) when it is near. Through a course of events Ben convinces two men, Sam and Crile, to go in as partners with him and travel to another planet to prospect for precious. They face many obstacles along the way and a few people are even killed trying to steal their claim. Crile develops precious fever and steals the ship containing their find. The authorities blow it up and all of the precious is expelled into space.

There is a dog seen throughout the film either sitting on a cage or on the ground barking, being carried by an actor, licking the actor's face, playing with some children, or sitting in a chair. In one scene the dog is in a restaurant standing on a chair with his front paws on the table as he eats something from a bowl. In another scene, the dog is supposedly shot by an intruder. The dog is seen in the camp barking and the actor points a gun in the dog's direction and then pulls the trigger. This scene was shot in cuts. The actor is seen pointing a gun in the dog's direction and then the blast from the gun is heard. The dog is then seen lying on the ground alive but whimpering. Ben comes back to camp and finds the dog on the ground and picks him up. There is no wound or blood seen on the dog. The trainer placed the dog on his mark and using verbal commands cued him to stay. In yet another scene there is some type of explosion in the distance at camp and the dog reacts by rolling over at the sound. Again the dog reacted to a verbal command by his trainer. Other animal action consists of three horses seen in the background at a ranch.