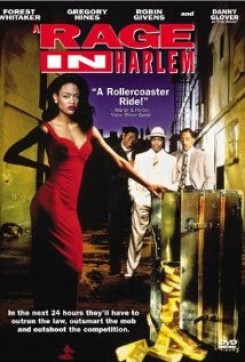 Rage In Harlem, A

A pure and innocent mortuary accountant is seduced into a plot involving stolen gold in this black comedy about love, lust and greed. The seductress is a sultry Southern siren named Imabelle, who has transported the gold from Mississippi to Harlem with her shady cohorts and the law in hot pursuit. She needs a place to stay while she tries to fence the gold and Jackson, a virginal mama's boy, provides the necessary bed and board. When Imabelle's criminal cohorts appear and spirit her away, the deeply smitten Jackson is sent into a rage to find his woman. He enlists the aid of his conman brother and the pair pursue the brutal and murderous crooks with Jackson never doubting that his Imabelle wants to come back to him.

One of the criminal characters, Easy Money, is devoted to his pet dog and takes the small dog everywhere with him, usually in his arms. In a sub-plot, the dog is held hostage and at one point a gun is held to the dog's head. The dog escapes injury, but in an ensuing struggle, the dog is presumably flattened when a door is swung open. Actually, the dog was not even there when the door was opened, but as this scene was filmed and edited in quick cuts, the viewer is left with the impression that he was. Despite all the violence in this film, the dog was never handled roughly. In another scene a snake is seen briefly draped over the shoulders of a singer.