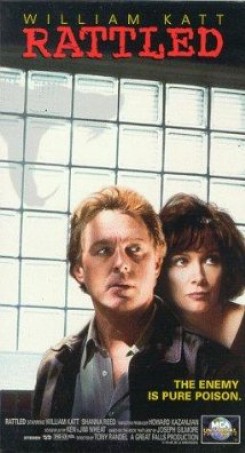 Rattled is a film about rattlesnake's terrorizing a community after a construction company dynamites their dwelling while they are still in hibernation. The Eden Valley Construction Company is blasting and bulldozing their way to access the central aqueduct in order to build, the Eden Valley Water Project. Eden Valley Water Park is a community water park that has been designed by Paul Donahue. Unbeknownst to Paul, is that the area they have chosen is the home to hundreds of rattle snakes, that at the present time are in hibernation. When the blasting starts, many of the rattle snakes are killed while others flee to find a new home. After being in hibernation, the reptiles are very hungry, which makes them unusually aggressive. In their quest to find food and new lodgings they are seen slithering through homes, bird cages, foliage, a water power plant, and the construction site. Along their journey many people are bitten. Domestic birds and a pet rat become dinner for some of the snakes. In desperation, Paul consults Dr. Remsen, a specialties on snakes and their habit. With the help of Dr. Remsen and Animal Control, the reptiles are captured and deposited to a new home.