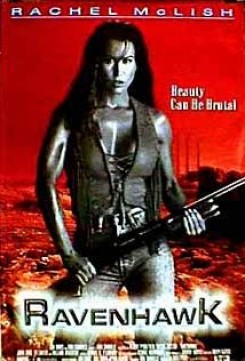 Raven Hawk is the story of a young woman's quest to avenge the murder of her parents. Rhiya Shadowfeather is a young Native American girl about to be initiated into womanhood through a coming-of-age ceremony and wears, as does her mother, a tattoo in the image of a raven hawk. Her father is chief of their tribe and is fighting to save the reservation land from the hands of greedy developers who want to profit from a toxic waste disposal plant on this site. The film opens with Rhiya being tutored by her beautiful mother in the meaning of the raven hawk symbol. It is for strength and honor. As they are preparing for her ceremony, three killers arrive, hired by the powerful men who want the Indian land. They break into the house, beat Rhiya's father and start to rape her mother. Rhiya, in an attempt to save her father, goes after the attacker with a knife and in the struggle, the knife plunges into her father, killing him. The criminals force Rhiya to also kill her mother. At the trial, they take the position that it was a ritual gone out of control and Rhiya is sentenced to life imprisonment. She is unable to defend herself since the tragedy has plunged her into a catatonic state of mind.