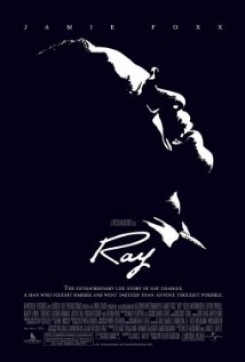 This little-known story of Ray Charles' rise from humble beginnings, his struggle to excel in a sighted world, and his successful exorcism of his personal demons make for an inspiring and unforgettable true story of human triumph.

In flashbacks to Ray's childhood on a farm, animals appear in pens in the background; horses, cows, and goats are led by rope harnesses; and horses pull carriages. The pens were inspected beforehand by Animal Safety Representatives, and trainers scattered food to hold the animals' interest before placing them on mark. Trainers positioned rope harnesses around the animals' necks and handed them to the actors only when actual filming began. Wranglers attached the horses to the wagons and carriages and doubled as the actors whenever possible.

In another flashback sequence, a young Ray tries to pick up a cricket that is crawling across the floor. A wrangler placed the cricket on the ground and placed two sticks out of frame to keep the insect in the general area. The child scooped up the insect with his hands and then set it down again so the nearby wrangler could retrieve the bug.

One scene contains footage of birds in flight. This was filmed documentary-style by the camera crew. The humming bird that appears outside the restaurant window in one shot was computer-generated imagery.

When Ray lies in the hospital going through a nightmarish drug withdrawal, various images, including those of dead animals, flit across the screen. Producers provided documentation for these taxidermic props.