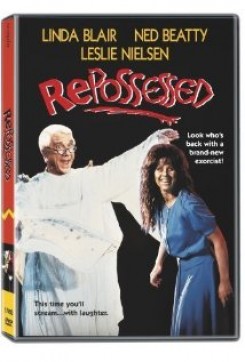 There are plenty of sight gags in this farce that spoofs The Exorcist. A housewife is possessed by the devil again, thus the title Repossessed. It seems Satan's spirit flew out of the television set while she was watching TV evangelists Ernest and Fanny. A young priest is called upon to do the exorcism and he seeks the help of the retired exorcist who did the housewife's original exorcism.

Fanny, the flamboyant evangelist has a pink poodle, Fou Fou. The poodle's fur was colored with a non-toxic vegetable rinse. Fou Fou jumps out of a car window to chase a ball that's been thrown into a tree shredder and Fou Fou is also shredded. Of course the dog was not really shredded. You don't see that on the screen. You just see some fake pink fur flying out of the machine. The scene was shot in cuts and edited. Fanny carries a pet to match every outfit. When her closet is opened, you see her "wardrobe" of pets hanging on hangers. This was achieved by making special jackets out of fake fur to match the animals' fur. The dogs were fitted with harnesses that fit inside the jackets. The dogs inside these jackets were hung in the closet. There was not pressure on the dogs, they were unrestricted in movement or breathing and were very calm. The scene was filmed quickly. In a scene where a Chihuahua is put in a basket that supposedly contains a Cobra, the dog and snake were filmed separately.