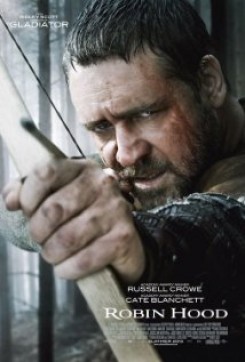 This is the story of King Richard the Lionheart, the Sheriff of Nottingham, the Maid Marion, and how an outlaw archer and his men fought an epic battle, ultimately becoming the legend of Robin Hood.

The horses used in this film were well-trained and accustomed to sandy and hilly terrain, and their shoes were fitted for this type of ground. All horseback riders were stunt riders or experienced actors who were skilled at riding, mounting and dismounting. All actors were given riding lessons and instructions on handling the horses before filming began. The actors were also instructed on how to lead the horses with ropes and lead lines. Intense stunts were only performed by seasoned stunt riders.

All running and galloping scenes were well-choreographed, and actors used caution while on and near the horses. The horses' rearing was a trained behavior. For shots of people falling off horses, the horses were trained to continue running to an end mark on their own. Trained horses dragged stunt men in a couple of scenes, which was well-rehearsed action, as were the fighting sequences. For shots of a horse running over a person, the person was a dummy and the stunt rider was adept at getting his horse to jump over it. The scenes showing several dozen horses near each other were well-choreographed. For scenes in which teams of horses pull plows or carriages, the drivers were experienced and the horses were familiar with each other and accustomed to pulling lightweight loads.

For an intense scene in which a tree falls onto a horse, two prop trees were created and placed 50 feet apart, next to a road. They were outfitted with hydraulic lines that controlled the angle and speed of their fall. The horses were ridden past the first tree, which was then dropped once 15 feet away from the animals. The horses were then ridden toward the second tree. A prop horse with a dummy rider on a hydraulic stand was placed on the road where the second tree was to fall. A crew member controlled the tree to fall onto the prop horse and rider. A stunt rider behind the prop horse stopped, turned his horse and fell off. The other riders turned their horses and reared them, falling off in choreographed falls.

During the ambush scene, the stunt riders stopped their horses and turned them, with one rider cuing his horse to lie down in a prepared spot (this was a specially trained horse cued to "fall"). Certain riders fell off and lay on the ground as if dead. Wranglers caught the loose horses. Prop horses were placed on the ground to make it appear as if they had been shot and killed by arrows. Neither the highly-trained animals nor the actors and trainers were ever in harm's way during this well-choreographed and well-rehearsed scene.

The scene in which horseback riders approach ships near the shore was filmed in two locations. The establishing shots were filmed on a beach in Wales. Men rode their horses a few feet into the water and up a ramp to a boat. Later, these horses were filmed on a barge in a large water tank with a wave machine causing mild rocking (which was exaggerated in post-production). The floor of the barge was reinforced with plywood and covered with mats for better traction. Prop horses stood in for real horses for parts of the scene. The shot in which they exit the boat and walk down the ramp was well-rehearsed action on a ramp with safe traction.

All weapons in the film were props, and arrows flying at or near the horses were computer-generated imagery (CGI). All smoke effects were water-based and safe for both humans and animals. All fires were created with fire bars controlled by crew members, and all animals were kept a safe distance away. Camera angles made the hills and cliffs seem steeper than they really were. Production provided documentation, such as receipts, for all dead animals, pelts, furs and animal food products (such as oysters).

For shots in which birds fly up and away from a castle, trainers released homing pigeons from their release boxes. The birds were banded to return home, which they all did. The action in scenes in which actors tie notes to a pigeon's foot and in a scene in a pigeon coop was well-rehearsed. The birds were accustomed to being together, and the actor exaggerated the motion of grabbing the bird.

Five trained mice were alternated for the scene in which mice walk on a table and paw at the food. Trainers cued the action, and all the food was deemed safe for the mice.

For the bee scenes, live bees were filmed flying around a hive as a beekeeper stood nearby and then wrangled them back into their hive after filming. CGI bees were also added in post-production near the men and their horses. The bees in the scene in which the friar throws them into a locked room were also CGI.

Throughout the film, several animals (chickens, goats, dogs, ducks, geese and sheep) are seen in the background performing such mild action as sitting, standing, lying, being held or petted and walking or running. For all of these scenes, trainers either cued the mild action or allowed the animals to do whatever came naturally on this closed and secured part of the set. The animals were all familiar with each other or were accustomed to being together. Trainers scattered feed on the ground to entice certain animals to stay in one area.

American Humane also monitored more action involving horses and other animals, but this action was cut from the theatrical release.