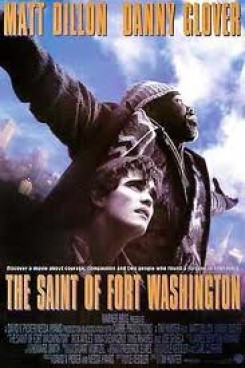 Saint of Fort Washington, The

The Saint of Fort Washington, set in New York, is an extremely depressing story portraying the plight of the homeless. Mathew has been institutionalized for the last three years, since he was 17, for schizophrenic tendencies. Upon his release he discovers that his mother has gone on vacation to Florida and changed the locks on the doors to their home. He realizes that he is no longer wanted, and he is now one of the many homeless people. Mathew goes to the Fort Washington Shelter looking for a place to sleep for the night. It is a terrible place, filled with hoodlums. This is where Mathew meets Jerry, an older black man, who had it all once, a home, a wife, two kids and two cars. But when he lost his job, he lost everything and, he too, is now one of the homeless. These two men develop a close and meaningful friendship. They wash windows of passing cars and make plans to save enough money to get an apartment and start their own business selling vegetables. This tragic and touching story leads us through the perils of life on the streets through the eyes of the homeless.

Animal action was limited to one opening scene in which Mathew is sitting in a junk yard and a small cat appears. Mathew picks up the stray cat and pets it.