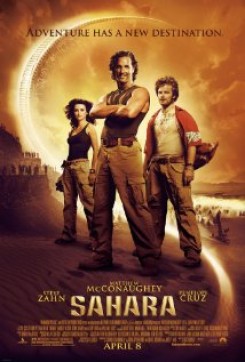 Master explorer Dirk Pitt goes on the adventure of a lifetime of seeking out a lost Civil War battleship known as the "Ship of Death" in the deserts of West Africa while helping a WHO doctor being hounded by a ruthless dictator.

American Humane’s Film & Television Unit did not monitor the foreign production Sahara, which was filmed in Morocco, Spain, and the United Kingdom. American Humane’s Film & Television Unit’s work is funded by a grant from the Industry Advancement and Cooperative Fund – administered by trustees from the Screen Actors Guild (SAG) and the Alliance of Motion Picture and Television Producers (AMPTP) – which allocates resources solely to cover SAG domestic projects working under the SAG/Producers codified agreement.