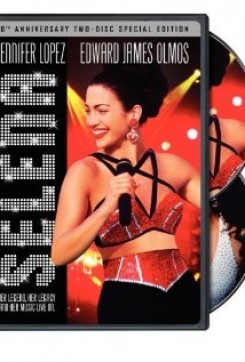 SELENA is a bittersweet portrayal of the tragically short life and career of the Tejano superstar. The film traces the singer's beginnings from a run-down area of Corpus Christi, Texas, to her untimely death at the age of 23, just as she was achieving international star status.

There's a moderate amount of animal action in the film. Horses are seen briefly lending atmosphere in several western settings. Then the scene shifts to an enormous sports arena packed with Selena's adoring and excited fans. Selena makes a spectacular entrance aboard a glitzy, horse-drawn open carriage. The driver stops the carriage at a center-stage position, and Selena alights amid the sounds of her cheering, exhuberant fans. These horses did not require any special training as they were performing tasks they normally do everyday. In an early scene, Selena is portrayed as a child who loves animals. She keeps a pet chicken in the family shower. When her kid sister pushes back the shower curtain, it surprises the chicken, who flies up to the windowsill, getting entangled in the slats of the Venetian blind. The bird/actor had been trained and rehearsed to fly from her perch on the shelf to a feeding box just above and behind the camera. The child-actress, who had been rehearsed separately, was then brought in to film the scene. On the first take, the trainer placed the bird on the shelf, and then called the bird by shaking the feeding box, but as the bird flew up from the shelf to cross to the feeding box, the nervous girl screamed, diverting the chicken, who flew to the windowsill, getting entangled in the slats of the blinds as she landed. The chicken was not harmed, as determined by our field rep who was on the set and examined the chicken. Because two chickens had been trained to perform the same action, the balance of filming was divided between the two birds. They then performed perfectly as they had done in rehearsal. In other animal action, a man walks a dog on a leash in a residential neighborhood, and seagulls, natural to the filming location, are visable in the background of scenes filmed on Texas beaches bordering the Gulf of Mexico.