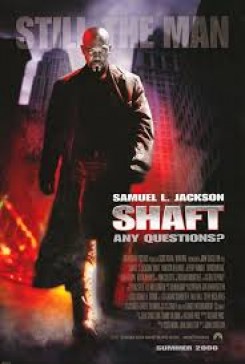 Shaft is an action adventure film in which director, John Singleton updates the 1971 blaxploitation classic. Samuel L. Jackson plays the hip detective who goes after a murderer he has arrested but who gets released on bail because of his wealth and connections.

There is a scene in which a gang of men walk out of a building to talk to Shaft. One man holds two aggressive dogs by their leashes. The two "gangster dogs" were actually American Bulldogs. One was a two year old female and the other was a three year old male. The trainer gave the leashes to the actor and stood directly off camera waving a toy at the dogs. This got the dogs excited and they pulled on their leashes, trying to get to the trainer. For those who see this as a stereotypical portrayal of the breed as a "dangerous dog", can also appreciate the bold style of the film that sees the story as clearly black and white, good versus evil.