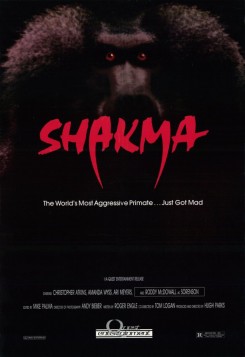 Shakma is a story about a professor( played by Roddy McDowel) and his students who decide to stay after work one Friday evening in the science building and play a game of "Nemesis" (a wizard/warlock type game). Earlier in the day a college research lab doctor had done an implant in a baboon's (Shakma) brain which is supposed to make him unaggressive. When this did not work the decision was made to euthanize the animal. The student assigned to do the euthanasia did not give the baboon enough euthanal. While the doctor and students are playing their game of Nemesis the baboon wakes up and violently kills the professor and all of the students. In the end the baboon accidentally kills himself.

This movie was full of violent animal action, mostly the baboon attacking and killing people and the other animals in the lab. There were four fake mechanical baboons used in the movie including the one which was weighted down, thrown through a mirror and into the incinerator at the end of the movie. There were also two mechanical baboon arms used in a scene where the baboon gets his arm broken in the bathroom door. At no time was the real baboon (Typhoon) used in either one of these scenes. In order to get the sounds of a baboon screaming, the production company purchased a sound track and dubbed in the sound. All attacks on people were faked with the trainer being made up and dressed to portray the various actors. The baboon was very attached to his trainer and played with him by jumping on him. This appears as aggression on the screen. The blood throughout the movie was fake blood. The running and jumping of the baboon is all done by the trainer calling him. Whenever the baboon aggressively runs into the door and pounds on it, it is a trainer on the other side of the door calling to the baboon. When the baboon sits in front of the bookcase and tries to pull it apart, it is the trainer who points to the slats and tells him to "pull it". In order to accomplish a scene where the baboon is violently attacking one of the students on the floor, the trainer, playing the part of the actor, lays down on the floor and calls the baboon to get on his chest and then the trainer and the baboon roll from side to side (the trainer had tied a chicken neck around his neck to get the baboon to nuzzle his neck area). The scene showing the dead animals in the lab was portrayed by fake animals and stage blood. The baboon was briefly on set with some live pigeons that were in a cage but at no time were there live animals loose on the set with the baboon. Dummies were also used in the picture to depict the dead people. The baboon had been trained to respond to vocal commands, such as, "pick it up", "throw it", "push it", "over here", "jump", "sit", "stay", "hit it" and "get it". The baboon's natural social behavior was used throughout the picture. A baboon normally bonds with his trainer and develops a "you and me against the world" attitude. Even though the movie depicts much violence, in reality the baboon and the other animals on the set were treated very humanely. American Humane was not only on the set every day during filming, but also observed and filmed the training at the training compound.