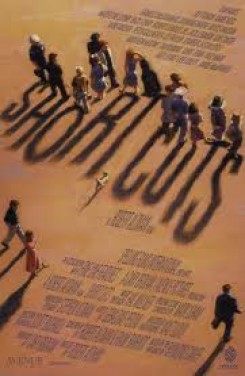 Short Cuts is a present day drama set in Los Angeles. It is a very involved, complex story portraying the lives and hardships of ordinary people and what a small world it actually is. There are nine intersecting stories going on simultaneously throughout this movie involving everyday people. It tells the stories of these people's lives in common day situations. It also shows just how involved we are with so many people without even being aware of it, and that each of us has the ability to control their own destiny if you are willing to make the effort.

There are several animal scenes in this film. Suzie, a pet dog belonging to one of the couples, is present in several scenes. He, yes, Suzie is a he, is seen barking, being held, being petted, riding in a police motorcycle saddlebag with his owner, Gene, and pulling on Gene's pant leg. When the dog rides in the saddlebag, he was merely placed in the bag by his trainer and went for a little ride. Gene stops the motorcycle and throws a bone for Suzie. When Suzie runs for the bone, Gene drives off, leaving Suzie behind. The dog simply fetched the bone, which was his own toy bone. When the dog pulls on the actors pant leg, he was following verbal commands from his trainer, who was out of camera range, to "play tug", which he had been trained to do prior to filming. In another scene, while three buddies are fishing, one of them catches a fish and pulls it out of the water and into a net. At the same time, one of the other men also catches a fish, skimming the water with the fish as he reels it in. When they return to camp they proceed to gut the fish, preparing them for the evening meal. The fish that were caught were not actually hooked. The fish wrangler strung a harness through the gill of the fish at the side of the mouth which was then attached to the fishing line to make it appear as if the men caught the fish. The fish that was gutted and cleaned was a purchased dead fish. Other animal action included tropical fish swimming in an aquarium in three scenes and goldfish, supposedly being brought from the pet store, being poured from the plastic bag into a fish bowl. These goldfish were indeed purchased from a pet store and when this scene was completed, the fish were given to one of the crew member's children to keep as pets.