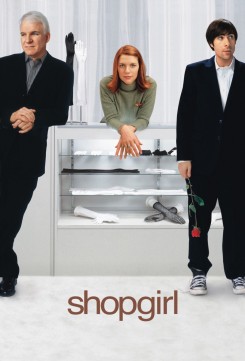 A film adaptation of Steve Martin's novel about a complex love triangle between a bored salesgirl, a wealthy businessman and an aimless young man.

American Humane’s Role
The American Humane Association’sFilm & Television Unit monitored this film. Shopgirl is a Screen Actors Guild (SAG) production, and therefore it was required to provide American Humane’s Certified Animal Safety Representatives on-set access whenever animals were used. During pre-production of the film, American Humane’s Film & TV Unit received a copy of the script and the daily call sheets. American Humane’s Animal Safety Representatives carefully reviewed these materials to determine whether any scenes or situations appeared to put animals at risk. Animal Safety Representatives were then on the set to ensure the animals remained safe throughout production.
This film met the Guidelines established by American Humane, received the Monitored Acceptable rating, and was awarded the ""No Animals Were Harmed”® End Credit Disclaimer.
Detailed Animal Action
During Mirabelle and Jeremy’s first intimate encounter, Sylvia the cat sits on the floor at the foot of the bed and bats at a pair of underwear dangling off Jeremy’s foot. The cat then jumps on the bed and observes them. For this mild scene, two trainers cued the cat to stay and used a bait stick to get her to look in different directions while the actors went through their dialogue. All went as planned, and trainers offered Sylvia treats in between takes.