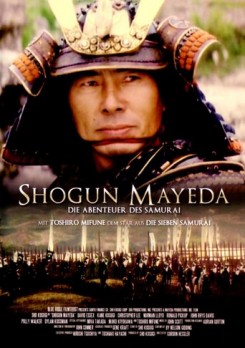 Shogun Mayeda is an action-adventure which begins in 17th Century Japan where the country is divided between two powerful forces. The leader of one force feels he can win the war if he can obtain muskets to fight against the swords of his enemy. He decides to appeal to Spain for the needed firearms and sends his son and Mayeda, the young lord's trusted teacher and guardian, as his emissaries. The two set sail on their important mission where they will encounter treachery, danger and romance. The film is reminiscent of an old-fashioned swash- buckler. Mayeda has ample opportunity to exhibit his Samurai skills. The photography is colorful and beautiful with impressive background music.

Although there are battle scenes with soldiers on horseback, it's the soldiers who are injured and fall off their horses. No horses are seen being injured and there are no stunts or horse-falls in any scenes involving horses. In other scenes, animals provide atmosphere such as fish in a stream or a mule and chickens at dockside. During the voyage there is a brief shot of a school of porpoise swimming free in the ocean.