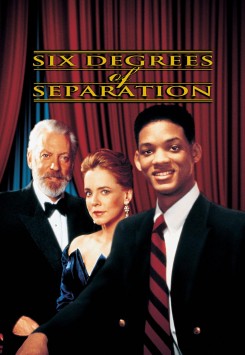 Six Degrees of Separation is based on the play of the same name. The plot revolves around the concept that every person is bound to every other person in the universe by only the separation of six other people. John Flanders Kittridge and his wife Louisa, known as Flan and Ouisa, are in the business of dealing fine art. They have three children who attend the finest of colleges. They have most everything that a couple could want. One evening a young black man appears at the Kittridge home with a stab wound. He claims his name is Sidney Poitier's son, Paul, and that he attends college with the Kittridge's son. He explains that he was mugged and didn't know where else to go. The Kittridge's tend to Paul's wound and allow him to spend the night. By doing this, their lives are changed forever by this young stranger, whom they soon learn is a sadly disturbed adolescent.

Animal action is mild and limited to two scenes. In one scene Ouisa, in a dream sequence, is lying in her bed with ten cats and three kittens. She pets the various cats and holds one of the kittens while having a conversation with Paul. In the other scene, Ouisa is seen carrying their pet Cocker Spaniel through the living room. Although this is their pet, this is the only time the dog is seen.